National and international laws have been put in place to protect many species of wildfowl from the population declines, and even extinctions, that can be caused by unsustainable hunting. Despite this, there are regular sightings of pellet-ridden birds; however, few studies investigate the prevalence of this type of anthropogenic damage or its long-term impacts. These are likely to be particularly problematic for long-lived species such as migratory whooper (Cygnus cygnus) and Bewick's (Cygnus columbianus bewickii) swans. These birds produce few young per year and do not start breeding until they are several years old; thus, the health of swan populations could be seriously impacted by decreases in adult condition and increases in adult mortality.

In the UK, these Bewick's and whooper swans have been protected since 1976 and 1954, respectively. Despite this, many of the birds carry shotgun pellets in their flesh, which indicates that the animals are being hunted illegally. Researchers at the Wildfowl & Wetlands Trust recently conducted a study to measure just how many birds were shooting victims, whether particular characteristics made some birds more susceptible than others, and whether there are any consequences of living with embedded pellets. They achieved this by taking live X-rays of swans caught in "swan pipes" at 4 sites; they also analyzed postmortem data from swans that had been collected between 1970 and 2009.

Overall, the scientists considered 1,492 X-rays from 1,132 birds. Nearly a third of Bewick's swans carried pellets (43.2% of all adults), while this was true of only about a tenth of whooper swans (16.3% of all adults). Although most shot birds had 1-3 pellets, up to 30 were recorded within a single Bewick's swan, and up to 11 were found within individual whooper swans. Males and females were equally likely to have been shot, but older birds generally carried more pellets than younger ones. For Bewick's swans, more pellets were also found in larger birds--perhaps because they offered a bigger target that was easier to hit.

Over 200 birds were captured multiple times, allowing the researchers to look for changes in pellet load over time. Between the two species, 50 of these birds were found to have more pellets at the second capture. Since the birds had remained on their wintering grounds between the two X-ray periods, this result roughly pinpoints locations where the birds were shot--Slimbridge, for the Bewick's swans, and Caerlaverock, for the whoopers. On the up side, the percentage of recaptured birds with an increased pellet load decreased over time for both species, indicating that, while illegal hunting continues, it is at lower levels now than it was in the past.


The presence of pellets did not appear to have a statistically significant impact on body condition--although the relationship between pellet count and condition did trend towards significant in Bewick's swans. Among dead birds collected for analysis, 8.4% of Bewick's swans and 3.1% of whooper swans appeared to have died from gunshot wounds. However, the proportion of deaths varied over the years; again, the evidence indicated that illegal hunting is still a problem, but less of one now than in previous decades.

While the presence of protective laws seems to have reduced swan shootings, it doesn't appear to have prevented them altogether. Bewick's swans are particularly susceptible, carrying pellet levels similar to those observed in huntable species such as the pink-footed goose (Anser brachyrhynchus). Differences between the two swan species may result from differences in their habitats and migration routes. Bewick's swans breed on the arctic tundra of European Russia, then winter in the northwestern portion of Europe, staging in Estonia and the Gulf of Finland along the way. Their long route puts them into much longer, and more frequent, contact with humans than that experienced by British whooper swans, which breed in Iceland and then fly east across the ocean to winter in the UK. An added burden of the longer, more overland, migration route of the Bewick's swans is that it is more difficult to adequately and effectively police hunting activities in so many countries. 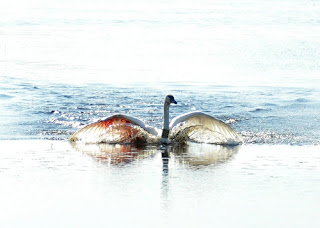 (Trumpeter swan, Cygnus buccinator, injured by illegal shooting; luckily, it was spotted by bird-lovers, patched up by a veterinarian, and released back into the wild)


It would be useful to evaluate the actual rate of deaths per shooting event, and to understand how hunting injuries may interact with normal levels of disease and exhaustion to hamper the birds during migration. Further, additional studies would be needed to directly measured how pellet loads impact animal health and survival, and whether these effects go on to influence the health of swan populations. However, these data are not easy to collect. It is also difficult to pinpoint where poaching occurs and why it happens. The authors suggest that partnerships with hunting organizations might be effective in providing hunters with proper identification, identifying at-risk areas, and uncovering more information on why swans continue to be persecuted. They stress that regulation should not occur on a country-by-country basis, but rather should be pursued at the flyway level--offering protection to these migratory birds throughout their entire trip, rather than at just a portion of their pit stops along the way.