Supplemental feeding efforts may be harmful to endangered wildlife

What if conservation efforts harmed the very species they were intended to help? This question recently inspired a research project focused on the Spanish imperial eagle (a.k.a. Iberian imperial eagle, a.k.a. Adalbert's eagle, a.k.a. Aquila adalberti), one of the most endangered birds of prey in the world. There are currently thought to be fewer than 500 individuals remaining in the wild, over half of which live in Spain. Throughout the bird's Spanish range (Castilla-La Mancha, Madrid, Extremadura, and Andalucia, in the central and southern portions of the country), conservationists have invested both time and money into supplementary feeding efforts aimed at improving the health of both individual birds and their entire population.

However, collaborators from the Museo Nacional de Ciencias Naturales, the Estación Biológica de Doñana, and GIR Diagnostics worried that supplemental feeding might actually be harmful to the birds. Specifically, they were worried that some of the food items left out for the eagles--commercially-reared rabbits, to be exact--might contain chemicals that could depress the birds' immune systems, and/or pathogens that could jump between species. 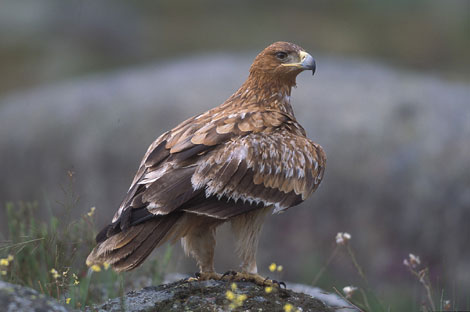 In order to explore this possibility, the researchers examined 3 groups of eaglets: those that did not receive supplemental feeding, those that were fed with wild or domestic rabbits that were known to be free of chemicals, and those that were fed with domestic rabbits obtained directly from farms and therefore potentially containing risky chemical compounds. Liver samples were obtained from the "risky" rabbits used in this last treatment so that the presence of veterinary pharmaceuticals (antimicrobial agents including fluoroquinolones and diclazuril) could be quantified. Blood samples were collected from all eaglets so that they could be assayed for immune activity and the presence of avian pathogens.

Domestic rabbits used as dietary supplements for eagles had residues of both quinolones and diclazuril in their livers. These same chemicals were also found in the blood of eaglets that ate the "risky" rabbits; the majority of birds had both chemicals simultaneously. However, eaglets in the other 2 supplementary feeding groups did not have any drug residues in their blood. Nestlings with circulating quinolones had lower immunological activity than those without, indicating that the presence of these chemicals was detrimental to the birds. In fact, of sick nestlings admitted to recovery centers throughout the study area, 82% had been subjected to the "risky" rabbit treatment group. Surprisingly, however, the only immunological difference directly related to supplementary feeding (as opposed to the presence of chemicals obtained through supplementary feeding) was a lower level of interferon-gamma, a protein that plays a role in attacking invasive bacteria and viruses.

(Rabbits at a commercial farm. Animals like these are often given antimicrobial agents such as quinolone and diclazuril in order to minimize the risk of epidemics.)


Of 191 eaglets surveyed, 144 were infected with at least one pathogen. Similar levels of pathogens were found in eaglets that received either no supplemental food or "safe" supplemental food. However, many more pathogens were found in eaglets that were on the "risky" diet but had no quinolones in their blood. Seven pathogens were detected only in eaglets given the "risky" rabbits; further, the number of pathogens per individual was higher in eaglets with any kind of supplementary feeding--"risky" and "safe" alike--and in those with quinolone residues. Thus, both supplementary feeding and the chemicals it can transmit are independent risk factors for a high pathogen load, suggesting that pathogens can jump from rabbits to eagles during feeding events.

Cumulatively, these findings indicate that supplementary feeding can have unintended side effects that, because they are subtle, may not initially be easy to detect. As a result, managers may not even realize that their methods are causing harm to the very species they are meant to help. This is potentially problematic not only to Spanish imperial eagles, but also to the many other species that have been given similar treatments--such as vultures, condors, kites, lynx, and bears.

(Iberian lynx, Lynx pardina. Managers have seen declines in this species since introduction of a supplementary feeding regime--coincidence?)

More detailed studies are needed to explain the variations observed among eaglets in the same supplementary treatment, as well as the general lack of direct effect of treatment on immune status. These likely derive from different veterinary practices at different farms providing rabbits for the same supplementary diet and/or fluctuations in immune activity during and after ingestion of chemicals. One topic the authors did not address was the potential for variation to occur in the diets of multiple nestlings within the same supplemental care areas; although adults clearly use the provided rabbits as prey for their young, it is not clear what percentage of the birds' diet these compose, whether this differs from nest to nest, and how much diets differ among various chicks in the same nest. Each of these factors could have had serious impacts on the relationships investigated in the current study.

In addition to understanding the short-term implications of supplemental feeding programs, it will be important to assess whether they could also affect eaglets over the long run. Do eaglets with suppressed immune systems have reduced fledging success, lower body condition, shorter life spans, or reduced fertility? Quinolones may have direct effects on internal organs, bones, articular cartilages, and tendons, suggesting that supplemental diets could, indeed, continue to impact birds long after they are no longer eating anthropogenically supplied rabbits. Depending on the answers to these questions, managers may need to suspend supplementary feeding efforts altogether, avoid the use of chemically-treated rabbits, or accompany dietary supplements with an additional management technique aimed at inhibiting the negative effects of quinolone and other chemicals.

---
For supplementary images associated with this and other Anthrophysis posts, please visit the Anthrophysis pin board on Pinterest.