When many animals occupy the same habitat, some amount of conflict is inevitable--both within species and between them. This is especially true when individuals are attempting to utilize a single resource that is spatially fixed--such as in the American West, where wild animals often take advantage of tanks and artificial catchments that are installed for use by livestock. In these arid environments, water is often absent or only seasonally available, and so competition for access to anthropogenic sources of water can become quite fierce. Research in other habitats has indicated that, among interspecies conflicts at least, bigger animals are likely to dominate.

In the western US, coyotes (Canis latrans), bobcats (Felis rufus), and gray foxes (Urocyon cinereoargenteus) have similar geographic ranges, utilize the same wide range of habitats, and prey upon the same selection of small mammals. Unfortunately, they are also susceptible to many of the same pathogens. Thus, if these animals fight for space at the same livestock watering holes, there is a high potential for the spread of disease.

However, several previous studies have found that animals may partition their use of resources in order to avoid conflict. For instance, smaller animals may wait until night to access a resource that larger competitors use during the day. Recently, researchers from the U.S. Department of Agriculture investigated whether this might be occurring at livestock water features in the Chihuahuan Desert. They installed passive infrared-triggered cameras to monitor 25 tanks and 6 impoundments on a cattle ranch in Pecos County, Texas. The ranch land did not include any sources of free-flowing water, so the artificial receptacles were bound to be frequented by both livestock and the three aforementioned carnivores of interest. 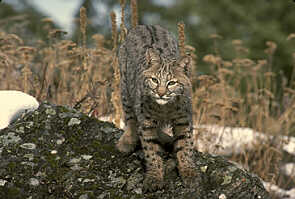 In addition to investigating which species used which watering areas, when they appeared, and how long they stayed, the researchers also quantified habitat features--in particular, those associated with the ability to take cover near the watering hole. The scientists used statistical analyses to determine how many visits each species should be expected, by chance, to make to each watering hole, then compared these values to actual counts in order to identify potential avoidance behaviors. Additional analyses were used to look at which water feature characteristics--habitat traits, water availability across the landscape, carnivore activity, livestock activity--best predicted the habitat use trends captured by the infrared cameras. 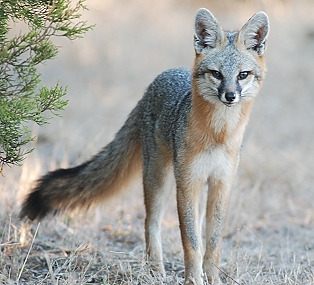 During the study period, the cameras recorded 916 visits by cattle, 132 by coyotes, 51 by bobcats, and 49 by gray foxes. The longest visits to the watering holes were made by cattle, followed by bobcats, coyotes, and then foxes. As predicted by the statistical analyses, coyotes were observed at all stations. There was a close match between the predicted value for bobcats (25) and the actual number of watering holes they visited (26), but foxes appeared at fewer watering holes (21) than expected (25).

Diurnal activity was highest among coyotes and bobcats, but fox activity occurred almost exclusively under the cover of darkness. Further, while the presence of coyotes and bobcats seemed to be most closely related to water availability, gray fox activity was closely associated with both the presence of other carnivores and the topographical complexity. Specifically, foxes were less likely to appear at places where coyote and bobcat activity was high, but they were more likely to be found in areas that had more rugged terrain offering a higher number of potential hiding places.

(Entrance to a ranch in Pecos County, Texas)

Cumulatively, these data indicate that gray foxes actively avoid encounters with their larger carnivore brethren. Not only did they utilize the fewest number of watering holes and avoid ones that were most frequented by bobcats and coyotes, but they also stayed at water features for the shortest length of time per visit. Clearly, foxes know they are subordinate competitors; as a result, they use both spatial and temporal resource partitioning in order to take advantage of the water--which, in this environment, is useful for both hydration and thermoregulation--while also avoiding costs associated with interspecies conflict.

So should these interactions (or lack thereof) between wildlife species affect management decisions? Carnivores were not observed to be aggressive toward cattle in any of the 34 carnivore-cattle interactions caught by the camera, suggesting that ranchers do not need to worry about loss of livestock to wild predators. There was also no interspecies aggression observed during 23 carnivore-carnivore interactions, suggesting that the exchange of disease--including the ever-feared rabies--is a minimal concern in this habitat. However, there may be other places where disease is a bigger fear, or where the subordinate competitor(s) is an at-risk species. In those circumstances, managers might consider altering the number and distribution of water features in order to deliberately minimize contact between species.

Thanks to the following websites for providing the images used in this post:
http://www.turtletrack.org/Issues00/Co10072000/CO_10072000_Coyote.htm
http://www.fishbc.com/adventure/wilderness/animals/bobcat.htm
http://www.elizabethmoon.com/archive/photogallery20080219.htm
http://www.landandfarm.com/search/TX/Pecos-County-land-for-sale/
Posted by Caitlin Kight at 09:29