The value of rare birds

Although conservationists often emphasize the need to preserve biodiversity, they do not always provide a good, clear argument for why biodiversity is so important. Does it improve ecosystem function? Is it aesthetically pleasing? Can it be economically valuable?

These are not always easy questions to answer in a scientifically rigorous way, but a new study by biologists from the University of Sheffield and the University of Tennessee seeks to understand at least one aspect of this complex issue. The researchers focused on one sector of the ecotourism industry--birdwatching--in order to quantify the value of rarity. In this case, "value" was determined by the number of birdwatchers that traveled to see a rare bird; this can be thought of as a measure of the aesthetic or emotional or mental importance of particular species to a group of people. However, birdwatching is the fastest-growing sector of the ecotourism market and generates billions of dollars worldwide each year. Thus, the measure also provides some indication of the economic importance of rarity. Further, since rare bird sightings are prime opportunities for conservation and education organizations to educate the public and raise money, in this instance, rarity can also contribute to general biodiversity awareness.

In the current study study, the "rare birds" in question were vagrants, individuals that had deviated from their customary migratory routes and were therefore visible outside their normal geographic ranges. In addition to recording the species of each vagrant and the maximum number of people viewing it, the researchers also noted the day of week, location, number of days that had elapsed since the focal individual had first been observed, and whether the sighting occurred on a protected area. The researchers collected 2 datasets containing each of these measurements. In the first dataset, they focused only on rare birds. In the second dataset, which they compiled for comparison with the first, they collected data on both rare and common birds--in other words, they examined total avian biodiversity, as opposed to just a single species. For this purpose, they utilized population data to rank birds on a 5-point scale, where 1 = extremely abundant and 5 = extremely rare. 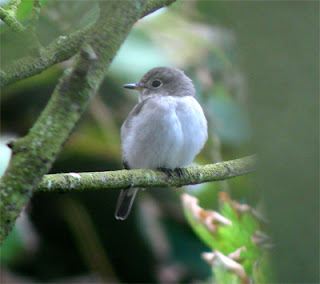 
Anywhere from 2 to 300 birdwatchers were found at rare bird events. In the first dataset, which focused only on rare birds, variations in birdwatcher numbers were explained almost entirely by species rarity. Specifically, the more rare a bird was, the more birdwatchers cared about viewing it. In the second dataset combining both rare and common birds, bird rarity was again the key factor driving the number of visitors. Thus, whether or not birdwatchers appeared at a site was not driven by overall site diversity, but by the number of rare birds available to be seen.

The scientists also performed a third analysis in which they only looked at data for two of the vagrant birds--the brown flycatcher (Muscicapa dauurica) and the red-flanked bluetail (Tarsiger cyanurus). While both were considered "mega" species--incredibly rare birds that are great additions to birders' life lists--the brown flycatcher had only been recorded once before in the UK, while the red-flanked bluetail had historically been observed 38 other times. At sightings of each of these species, the researchers asked birdwatchers for their home postal codes; this enabled an analysis of which species was "worth" a longer drive. It turns out that while birdwatchers traveled farther to see both of those rare species than to see common birds, they also traveled much farther to see the brown flycatcher than the red-flanked bluetail. In other words, even within the "rare birds" category, there is stratification such that increasingly rare birds are increasingly more "valuable."

All in all, the findings of the study indicate that rarity is an important commodity--at least among this subset of individuals (which, incidentally, were generally white males). Although this can be good--flooding the local economy with money from visiting birders, providing opportunities for bird conservation groups to advertise and network--it also has the potential to do serious damage to the environment. The scientists reported that the birdwatchers could be quite aggressive in their searches for extreme rarities, trampling vegetation and trespassing onto private land. In cases when vagrants hang around for several days, quite a bit of cumulative damage could be done to the local habitat. Likewise, if these results are extrapolated to species that are not just rare locally, but are actually endangered on a global scale, similar behaviors among wildlife viewers could seriously disrupt conservation plans aimed at protecting and fostering the growth of animal populations.

In order to get a better understanding of the value of rarity, further studies are needed. These might include additional predictor variables--such as the aesthetic appeal of particular vagrants or the travel costs associated with going to see them--or investigate different species in other geographic areas. Long-term datasets could be collected if wildlife sites instigate protocols for standardized visitor counts that would allow comparisons of visitor numbers when rare species are present/absent. With additional information, the results of studies like these can potentially be used to create better conservation and management policies for other situations in which species rarity is valuable--including the hunting and trade of wild animals.

Thanks to the following websites for providing the images used in this post:
http://www.centralpark.com/photos/show/668/bird-watching
http://mikewatsonsdiary.blogspot.com/
http://able2know.org/topic/89445-245