To many people who encounter lantana (Lantana camara L.) outside its native South America, the plant is a nuisance that threatens to overrun gardens and agricultural fields, outcompete crop species, and require almost constant pruning. To others, lantana is not only an attractive ornamental that can be used medicinally, but also creates a useful mulch that improves soil quality, helps check erosion, provides twigs that can be used as fuel, and, most importantly, is a cheap and easy method of repelling mosquitoes--including those responsible for malaria. New research recently published in the journal PLoS ONE looks at these multiple roles of lantana and asks whether the plant's anti-mosquito properties are enough to recommend its use as a malaria control tool in Africa even though it is an invasive species.

The study was conducted by an international group of collaborators from Concern Worldwide Tanzania, the London School of Hygiene and Tropical Medicine, the Ifakara Health Institute, and Durham University. The researchers conducted their study in the Kagera Region of Tanzania, which is remote and poverty-stricken. Traditional methods of malaria control--both in Tanzania and elsewhere--include long-lasting insecticidal nets and indoor residual spraying. Unfortunately, the nets cost US$5 apiece, which is a considerable sum for families that have little, if any, disposable income. As a result, over half of the households in the study village had no bednets at all, and only 9% had enough bednets for all family members. Spraying efforts, while effective, are perceived to have negative side effects (such as increasing the abundance and activity of fleas in homes); in any case, these efforts had recently been discontinued by the Tanzanian government. The researchers were therefore interested in finding a low-cost alternative that could benefit many people simultaneously, would be simple to install and maintain, and would not require much upkeep effort.

(A long-lasting insecticidal net, or LLIN)


Several mosquito-repellent plants were considered for installation as "house screens," but lantana was ultimately selected because of its "size and vigor, year round growth, and known repellency towards the African malaria vector Anopheles gambiae s.s." Its efficacy stems from the presence of particular molecules--terpines and alkaloids such as caryophylene, eucalyptol, alpha-humelene, and germacrene--that mosquitoes find unpleasant. It emits these volatile organic compounds from its leaves even in the absence of mechanical damage. Furthermore, while mosquitoes generally avoid feeding from lantana flowers, those that do have shorter lives and lower reproductive output. As an added bonus, the plants cost only US$1.50 per household.

During the study, the plants were offered to any households that wished to give them a try; ultimately, the researchers were able to compare the effects of lantana between 231 houses with, and 90 houses without, lantana screens. By the end of the research efforts, most of the lantana screens provided >25% coverage per house and had grown 40-150 cm high, often reaching homes' eaves--a particularly important point of mosquito entry. The use of light traps to capture mosquitoes within study households allowed the researchers to confirm that the majority of specimens present were A. gambiae s.s. Significantly fewer mosquitoes were caught in homes with lantana; across all mosquito-screened homes, total reductions reached 50%. For A. gambiae, 56% reductions were seen, and for the related mosquito species A. funestis, reductions reached 83%. Lantana also decreased the presence of other mosquito species that are considered a nuisance not because they transmit disease, but because they leave itchy bites.


All in all, the lantana screens appeared to be a success, and were met with fairly positive responses from the villagers. Unfortunately, some people reported that lantana invaded their agricultural fields and needed to be removed altogether, while others indicated that the plants competed for the same resources as their banana trees and therefore caused reduced output of this important crop species. These trends emphasize the fact that, for all its favorable properties, lantana is a weed, and an exotic one at that. As a result, the authors emphasize that a "thorough ecological assessment" would be needed to fully understand the potential effects of the plant in the different villages where it might be introduced; they suggest that lantana screens might only be used in areas where the plant has already been shown to coexist with local species without causing them harm.

Other drawbacks of lantana seem more serious--its leaves are toxic when eaten by cattle, which may happen when alternative foods are scarce, and, even worse, the plants may provide a refuge for Tsetse flies, which transmit sleeping sickness. Given these problems, one has to wonder whether another plant might have been more appropriate; other species initially considered include neem (Azadirachta indica A. Juss), lemongrass (Cymbopogon citratus L.), and several types of nabhengele (Ocimum spp.). Even better would be species that are actually indigenous to the region requiring antimalarial screens--though of course not every area has naturally growing mosquito-repellent plants. 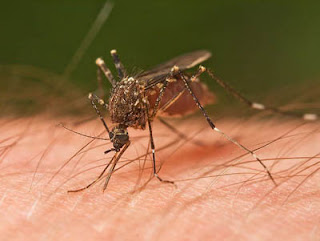 
One other discouraging aspect of the study was the finding that, while the vast majority of villagers knew that malaria was caused by mosquitoes, a third of individuals had mistaken ideas, or no idea at all, about how to prevent contraction of the disease. Further, only 60% of people knew that mosquitoes bred in puddles/standing water, and therefore worked to remove these features from their environments. Although knowledge cannot directly stop a mosquito from biting a human host, it could help villagers redirect their anti-mosquito efforts from, for instance, eating cleaner food, to filling in potholes where mosquitoes might lay eggs. Since a good portion of villagers were already aware of effective antimalarial behaviors, this knowledge could be shared amongst neighbors rather than requiring the intervention of outsiders.

Ultimately, it is difficult to make a recommendation for or against lantana just yet, given that much more work is needed to explore the potential ecological and economic implications of introducing this nonnative species--even with the best of intentions. In the mean time, perhaps researchers can focus their efforts on identifying a similarly useful native plant species, or working to assess the efficacy of sterile versions of ornamental lantana; although the latter might still grow with the same ferocity as "normal" plants, at least it would be unable to spread via propagation.

Thanks to the following websites for providing the images used in this post:
http://www.mosquitonettings.net/African-Mosquito-Net/Long-Lasting-Insecticidal-Net.html
http://en.wikipedia.org/wiki/Wikipedia:Featured_picture_candidates/Lantana_flower_and_leaves
http://majikphil3.blogspot.com/2010/12/old-socks-as-lures-for-mosquitoes.html
Posted by Caitlin Kight at 02:14