During economic downturns, people who live in poor, rural areas may turn increasingly often to the habitat around them for food, shelter, and/or fuel. After the disintegration of the Soviet Union, for example, residents hunted the saiga antelope (Saiga tatarica) so vigorously that it is now listed as endangered. George Wittemyer, a researcher from Colorado State University, recently investigated whether a similar process might be responsible for attacks on African elephants (Loxodonta africana) in two Kenyan wilderness area.

His study relied on data collected during weekly transect surveys in the Samburu and Buffalo Springs national reserves. All elephants that use the parks are known individually, so observers could determine whether an animal was missing and whether present animals were suffering from fresh, human-inflicted wounds. Elephants were assumed to be dead if they were missing from their family group on three consecutive survey occasions or if they were not detected during surveys for three years (whichever came first--this reflects the fact that elephants may roam far and wide and not consistently utilize reserve habitat). 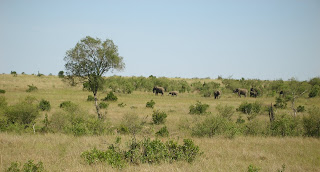 (A small herd of African elephants, Loxodonta africana, grazing in the Masai Mara)

As a predictor of elephant deaths and injuries, Wittemyer measured livestock prices, maize prices, gross domestic product (GDP) growth rates in Kenya and East Asian markets, and primary productivity--in other words, vegetation--in habitat in and around the reserves. Livestock prices are a reflection of local wealth, since pastoralist Kenyans invest their savings in cattle and goats; thus, lower market prices for livestock reflect harder economic times. In the Isiolo district that is home to the market nearest to the two reserves studied, there is not much agriculture; however, maize is grown elsewhere in Kenya and so maize prices reflect economic status at a more national level. Kenyan GDP growth rates also reflect the strength of the national economy, while GDP growth rates in East Asia were assumed to be a proxy for the global demand for ivory. Finally, primary productivity--which was measured using remotely sensed spectral images provided by a satellite--influences the health and condition of both cattle and elephants, since both types of animal eat vegetation. This impacts the market value of the former, and mortality rates in the latter (particularly among juveniles).

During the seven years over which the study was conducted, there were 45 juvenile mortalities, 81 deaths of subadults or adults, and 29 human-inflicted wounds--mostly caused by bullets, spears, arrows, and, occasionally, snares. Statistical models indicated that cattle prices were an important determinant of adult elephant mortality within a given season (e.g., the 7-month wet season or the 5-month dry season). Specifically, as cattle prices decreased, the number of elephants likely to be killed rose from 1 to 13. While primary productivity was not a strong predictor of deaths among adults, it was the most important predictor of seasonal juvenile mortality--as vegetation decreased, the likelihood of juvenile death rose from 1 to 6. Thus, while young elephants tended to die from lack of food, older elephants were preferentially targeted by humans as sources of both ivory and meat. 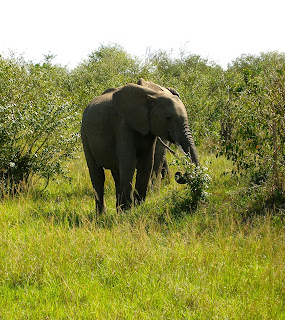 Models that investigated mortality over the entire year rather than within the two major seasons found that adult elephant mortality was very highly predicted by both cattle and goat prices. Cattle prices were particularly important; as they decreased, adult elephant deaths were likely to increase from 11 per year to 14 per year.

In general, affluent individuals tend to have a larger ecological impact than lower-income individuals, but, as evidenced by Wittemyer's elephant data, the rural poor can also have noticeable effects on wild animal populations (as well as on other variables not measured in this study). It is interesting to note that, even when cattle prices were highest, rural residents were likely to poach 11 adult elephants per year. Thus, despite the presence of reserves and protection measures--including armed patrols that may shoot to kill--poaching remains a serious threat to elephants even in the best of times.

Wittemyer surveyed 100 households on the borders of the two focal reserves in order to get a sense of how residents felt about animals and whether their attitudes varied according to their economic standing. Animal conflicts were cited as a problem more often by poorer households than wealthier ones (17% vs. 9%), but there was not a significant correlation between attitude towards animals and the number of livestock owned. This indicates that residents are not killing elephants because they bear them ill will, but simply see elephant poaching as a way to diversify their incomes.

Overall, it appears that wildlife managers could benefit from keeping their eyes on the stock market in order to better predict when poaching might become more common. As livestock prices dip, it might be beneficial to adjust antipoaching efforts or, better yet, enhance employment opportunities so that potential poachers have an alternative alternative source of income. Wittemyer points out, however, that conservation goals are often less important during economic downturns, and conservation funding is often diverted to human aid projects during these times. Thus, it may be difficult to convince the powers that be to act purely on economic data.