As has been mentioned several times in previous posts, the presence of anthropogenic noise influences the characteristics of songs performed by urban birds. However, the studies that have uncovered these relationships have generally relied on ambient noise recordings collected at the same time as male song recordings, and by the same researchers. A recent study describes how, for the first time, a team of scientists has attempted to correlate variations in song parameters with noise levels generated by sound maps--a type of map often produced by urban planners in order to assess which areas of a city are loudest.

In the study, researchers from the Museo Nacional de Ciencias Naturales examined the impact of urban noise in Madrid, Spain on the song parameters of great tits (Parus major). Multiple previous studies on great tits in a variety of northern European cities have found significant relationships between environmental noise and song characteristics; notable among these is minimum frequency, or the lowest pitch of the song, which is generally higher in noisier areas. The current research was aimed at uncovering whether this same relationship is found among birds in Madrid, and, if so, whether it could be pinpointed using maps generated from long-term recordings, rather than on-the-spot noise measurements associated with specific male song performances.

The scientists collected song recordings from 22 male tits that lived within a circular area with a radius of 3 kilometers. For each male's song, the researchers measured maximum frequency (the highest pitch), minimum frequency, total bandwidth, peak frequency per note (the pitch that had the greatest emphasis in each note), and length of strophe (a "grammatical" unit comprising song phrases composed of combinations of different notes). Using Madrid sound maps, they obtained average noise levels associated with each singing male's location; these varied from 60-75 dB.

Results of the analyses indicated that Madrid birds, like their more northern relatives, produce songs with a higher minimum frequency and smaller frequency bandwidth when they are exposed to higher levels of environmental noise. By shifting up the lowest pitches of their songs, the males avoid being masked by anthropogenic noise, which is also predominantly low in pitch. Because they do not also shift up their highest pitches, the birds produce songs with smaller bandwidths; these "purer" sounds are known to transmit better through the environment, thus improving their chances of being detected by receivers. 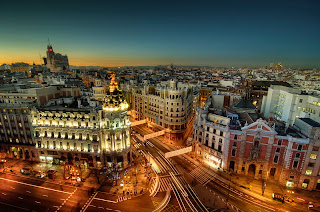 (A tit's-eye-view of Madrid, Spain)

Song characteristics were highly consistent within individual males. This, in combination with the fact that the ambient noise levels were produced by maps made from long-term noise data, suggests that environmental noise conditions prompt males to make stable, long-term adjustments to their vocal performances.
This sort of behavior is similar to that observed in response to "natural" noises, such as waterfalls and high wind. Thus, it appears likely that at least some songbirds are innately prepared to deal with environmental variability.

The exact mechanism driving these changes is still not clear. However, the scale of this study suggests that genetic variation and noise-driven differences in song learning are probably not the culprits; rather, it is more likely that birds make real-time, short-term adjustments that would disappear if these individuals were relocated to quieter habitats. In order to know this for sure, it will be necessary to perform experimental manipulations in which birds are moved to various habitats with different levels of background noise; alternatively, long-term tracking studies could follow the same individuals as they move through different environments over the courses of their lives.

Salaberria, C. and Gil, D. 2010. Increase in song frequency in response to urban noise in the great tit Parus major as shown by data from the Madrid (Spain) city noise map. Ardeola 57(1):3-11.

Thanks to the following websites for providing the images used in this post:
http://www.wildechoes.org/joomla/index.php?option=com_content&view=article&id=45:test-page-for-great-tit&catid=40:paridae-tits&Itemid=61
http://giorocknroll94.blogspot.com/2011/04/wonderful-trip-to-madrid.html