It can be all too easy to focus on "charismatic" and "umbrella" species and overlook the unsung heroes of our ecosystems. In the world of urbanization and anthropogenic disturbance research, for instance, there have been scores of studies on birds and mammals, but many fewer on insects. Yet insects--especially bees--are thought to be the most important group of pollinators worldwide; 70% of crops used for human consumption are dependent on animal-mediated pollination, an ecosystem service that was recently estimated to be worth €153 billion in a given year.

These are all questions that have been investigated by new research conducted in Birmingham, UK, by collaborators from The University of Birmingham and the Warwickshire Museum. The researchers used land cover maps to select 24 sites along the rural-to-urban gradient in the Birmingham vicinity; each area was classified as rural, suburban, or urban. Because churchyards and cemeteries could be found in all three types of habitat, these were the areas where the scientists went to survey pollinators--including both bees and hoverflies--and characterize the habitat in which the animals were living.

Overall, they recorded 1292 individuals of 58 bee species and 714 individuals of 50 hoverfly species. Both abundance and diversity were impacted by degree of urbanization, but the exact relationship differed depending on species. Bees, for instance, were in higher abundance in rural sites, but hoverfly densities were consistent across all three types of habitat. Although the richness of both bees and hoverflies peaked in rural areas, there were not major differences between bee richness in rural and urban sites, while hoverfly richness was similar in urban and suburban areas. In other words, one type of habitat was not uniformly "better" for bees or hoverflies or for the two types of animals considered together (as "pollinators"). (European honey bee, Apis mellifera. These have been suffering population declines in Europe and North America, but the causes have not yet been identified. In the current study, these made up less than 5% of all bees surveyed, and never accounted for more than a quarter of the bees at any given site.)

A similar result was found for the habitat feature-level analysis. Overall, many things were found to impact richness and abundance--including exposure to wind, abundance of flowers, and percentage of "built" space (e.g., sidewalks, buildings, railroads, etc.). However, the predictive value of each feature varied by animal type and metric. Bee abundance, for example, was best predicted by the percentage of built space, while hoverfly abundance was predicted by the presence of gardens and, in particular, the abundance of flowers. On top of this, richness and abundance of the different groups were best explained at different scales, reflecting the fact that these are animals that have different flight abilities and may utilize different amounts of habitat. While bee metrics were better explained across a larger spatial scale (2.5 km), hoverfly metrics were generally better explained at smaller scales (250 m - 1 km). 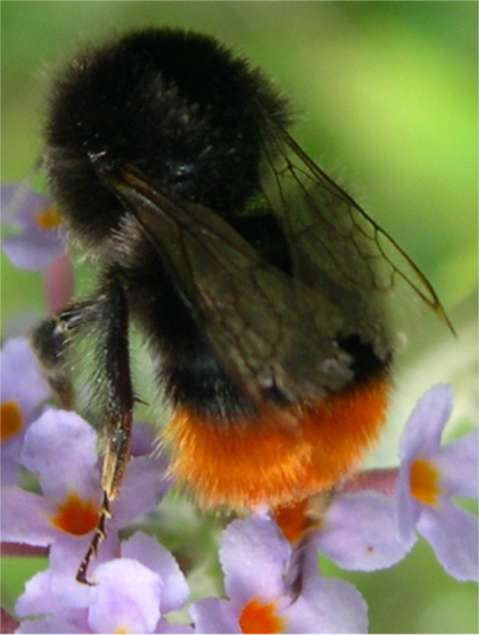 The researchers performed one last analysis that looked across all the individual species-level responses in order to generate a single model that described the total pollinator assemblage. Percentage built space and flower abundance were found to be the most important influences. Interestingly, the analysis revealed that a few species are positively associated with built space, though they are outnumbered by species that appear to respond negatively to anthropogenic habitat features. Although there were a few species that were found only, or predominantly, at rural sites, most species could be found across the anthropogenic disturbance gradient.

As reflected by the low explanatory power of this analysis (15.3% of all the variation among the data), landscape distribution of pollinators is affected by many factors, only some of which were measured here; things like food distribution, natal and overwintering resources, behavior, and inter-specific interactions will also contribute to determining whether a species is likely to be present at any given site. Still, it is possible to see some broad trends. Species that are strong fliers and utilize a variety of food sources--the red-tailed bumblebee (Bombus lapidarius) and the European honey bee (Apis mellifera), for instance--did not respond negatively to urbanization. Cavity-nesting pollinators also tended to do well in urban areas. On the other hand, pollinators with specialist diets--including the European hoverfly (Helophilus pendulus)--seemed to suffer more in built-up areas. 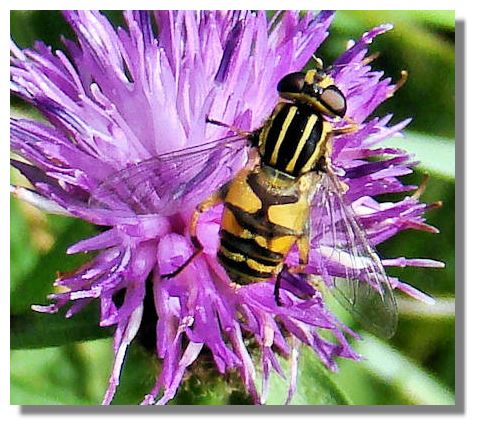 Overall, these findings suggest that urbanized habitats actually can provide decent habitat for many species of pollinators; although some species and individuals became less abundant towards the urban end of the disturbance spectrum, others maintained or even increased, thus facilitating fairly diverse pollinator assemblages in disturbed areas. However, rural sites tended to have higher numbers, and a greater diversity, of flower forage, which is why they were generally associated with more bountiful and diverse groups of pollinators. Still, for suburban and urban dwellers who wish to maintain green spaces and gardens--including those that provide edible crops--the study provides some good news.

Unfortunately, it is hard to generalize these findings to other areas because different urban areas have unique geographies and development histories. In the future, it will be important to perform similar surveys in other cities with different environmental features, thus allowing researchers to search for broad-scale, global trends.