Silvereyes adjust their vocalizations in response to anthropogenic habitat changes

A new study on an Australian bird species--the silvereye, Zosterops lateralis--has found that birds Down Under respond to anthropogenic environments in a similar way as their European and North American counterparts: by adjusting their vocalizations in order to improve transmission through human-modified habitats. 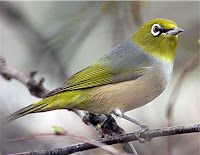 Researchers from the University of Melbourne recorded 81 individual silvereyes both singing and calling during the "dawn chorus"--the deluge of vocalizations with which most birds begin the day. Recordings were collected in urban and rural habitats throughout Australia. However, because there can be some overlap in the noise levels found in these two types of site, the scientists asked two separate questions: "Are characteristics of vocalizations related to site type?" and "Are characteristics of vocalizations related to noise level?" It turns out that the answer to both questions is "yes."

Birds in urban habitats--which were an average of 9 dB louder than rural habitats--produced songs with higher minimum frequencies; to some extent, silvereyes also increased the lowest pitch of their calls. Similar patterns were found among birds in noisier sites. Specifically, songs were an average of 13.4 Hz higher and calls were an average of 11.4 Hz higher per decibel increase of ambient noise. Although birds in urban habitats had narrower frequency ranges--caused by an upward shift of minimum frequency but no change in maximum frequency--this was not true of animals in noisier habitats. Silvereyes sang songs of similar length across all environments, but those in both urban and louder areas sang at a slower rate--with a 0.75 syllable per second decrease between the noisiest and quietest sites.

The short-term advantage of these vocal manipulations is clear: Upward shifts in minimum frequency reduce the amount of vocalization that can be obscured by low-frequency anthropogenic noise, while slower delivery rates--a version of good avian enunciation--make sure that notes in a song are not obscured by human noise or echoes from reflective anthropogenic surface. What isn't clear is whether these alterations have long-term impacts, given the importance of vocalizations in male-male territorial disputes, reproduction, and parent-offspring communication (among other things). An additional question is whether these spatial differences in song are the result of early-life vocal learning, or stem from genetic variation among populations.
---
Potvin, D.A., Parris, K.M., Mulder, R.A. 2011. Geographically pervasive effects of urban noise on frequency and syllable rate of songs and calls in silvereyes (Zosterops lateralis). Proceedings of the Royal Society B: Biological Sciences, 278(1717):2464-2469.