In dealing with anthropogenic disturbance, one of the most difficult conservation/management issues is that different human activities impact different species in different ways. Removal of trees and hedges, for example, may reduce the amount of feeding or sheltering area available for some animals, while for others it may take away places for potential nest building. For the Eurasian roller (Coracias garrulus), it is this last problem that causes the biggest difficulties, but only in an indirect way. These birds are secondary cavity-nesters, meaning that, because they cannot excavate their own cavities to nest in, they rely on holes dug by others. Thus, when species like woodpeckers have nowhere to create their nests, neither do rollers. This is one of the main reasons why roller population numbers are severely declining in 18 of 29 European countries, with a total estimated reduction of 30% over the past 10 years.

To combat this, managers have distributed nest boxes far and wide, hoping to provide otherwise lacking breeding habitat. However, there have been no concerted efforts to deliberately position the boxes in places where they are most likely to promote maximum breeding success. As a result, the boxes are in all types of habitat, sometimes near human structures and disturbances, at different heights and in different orientations. Researchers from the Departamento de Ecología Funcional y Evolutiva thought perhaps it would be a good idea to take a step back and investigate which of these box characteristics are associated not only with likelihood of box occupation, but also preference for, and breeding success in, particular boxes.

They performed their study in the Extremadura region of Spain, where local and regional conservation plans have relied heavily on nest box provisioning, and where agricultural intensification has previously been linked with breeding success in nest box-provisioned habitats. They focused on roller occupation in a 183-box network over a 3-year period. In addition to measuring variables associated with each box (height off ground, orientation of opening, whether it was exposed or concealed), they also measured a variety of large-scale environmental characteristics of the breeding territories, including altitude, distance to various habitat features, and land use patterns. This allowed them to ask four major questions: What factors contributed to the probability of occupation of a nest box? Did boxes with certain features produce more chicks than others? What factors made frequently-chosen boxes seemingly more attractive to the rollers? Did higher-quality birds choose boxes with particular features? 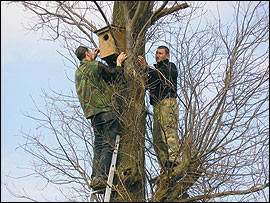 (Nest boxes have been provided for the roller throughout its range; here, volunteers for Serbian Roller Protection Program brave the heights to install a roller-sized nest box.)

Boxes were more likely to be occupied if they were farther from motorways, were surrounded by smaller portions of almond grove and/or pine plantation, and were more exposed. This last relationship, in particular, seems to suggest that rollers might have difficulty finding more hidden boxes. Unfortunately, the obvious boxes are also those that predators are most likely to discover--at these boxes, overall productivity--in other words, the number of fledglings produced--was significantly lower. There was also some evidence that boxes produced higher-condition chicks when the box opening was facing the northwest, away from cool winds coming off the nearby Sierra Nevada and Sierra de Baza mountain ranges.

None of the variables predicted which boxes were preferred. However, earlier breeders--those likely in better condition--were more likely to choose boxes facing the northwest. Given the relationship between chick condition and northwest orientation of the boxes, these parents were not only high-quality because they started breeding earlier, but also because they were making good decisions for the health of their young.

Overall, breeding rollers appeared to avoid highly human-manipulated areas, initially suggesting they were actively trying to avoid disturbance. However, further analysis indicated that the birds were probably not sensitive to human noise or activities--surprisingly enough--but, rather, that motorway and plantation habitats simply did not offer good places for foraging. In the future, then, it would be better to position boxes near fairly open habitat with a few good perches from which to hunt. Alternatively, conservationists could try to create more of these habitats in which to place the boxes. (Roller habitat in the Extremadura region of Spain)

It is a bit alarming that rollers most often chose to nest in exactly the type of box--those with high exposure--associated with the lowest level of productivity. This suggests that these highly visible boxes might be acting as ecological traps--poor quality habitats that look good and can therefore "trick" species into living or breeding there when they shouldn't. However, the researchers are quick to point out that productivity is only one of many breeding success indicators, and that their study only lasted three years; over a longer period of time, using different breeding metrics, they might find that these exposed boxes aren't actually so bad.

Still, they suggest that future nest box provisioning efforts should be focused on placing the boxes somewhere not too obvious, but also not too concealed--otherwise the birds might never find them. It might even be possible to use pruning efforts to artificially create better habitats. However, it is important to note that rollers that don't find nest boxes at all might go an entire breeding season--or more--without ever nesting. Thus, even a low quality breeding site is probably better than nothing, since one fledgling is better than none at all.

Thanks to the following websites for providing the images used in this post:
http://www.bird.at/Blauracke.136.0.html?&L=1
http://www.icpdr.org/icpdr/static/dw2006_1/dw0106p13.htm
http://www.tripadvisor.com/LocationPhotos-g187505-w2-Extremadura.html