Swimming in dangerous waters: the case of the coho salmon 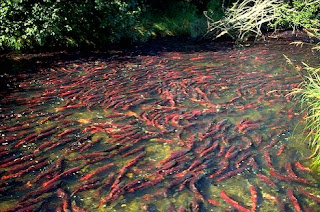 (Salmon spawning in an Alaskan stream.)

One of the most famous mass movements of animals is the salmon migration in western North America, during which sexually mature salmon migrate thousands of kilometers from the sea back to the freshwater streams where they were born; once there, they spawn and then die. Of course, spawning is not the only thing that can lead to the deaths of these fish; those who watch nature documentaries will have seen grizzlies standing in mid-stream stream to welcome the salmon back home with open mouths, but the fish may also be captured by fishermen, suffer from low water levels that leave them with nowhere to swim, or be cut off from their destinations by migration barriers such as dams. According to recent research, a likely addition to this list is toxic compounds produced by car emissions and washed into the streams by rainwater.

Over the past decade, surveys of coho salmon (Oncorhynchus kisutch) have documented the unexplained deaths of 25-90% of all adults per migration run in urban and urbanizing streams in the Puget Sound region near Seattle, Washington. The dead fish are generally brightly colored, indicating good health just before death, and females are found with full or partial loads of unspawned eggs. Prior to death, the fish may display a variety of symptoms, including disorientation, lethargy, loss of equilibrium, mouth gaping, and fin splaying. Cumulatively, these characteristics suggest exposure to chemical contaminants--especially since other causes have been ruled out by autopsy.

(A map of the Puget Sound area. Note the proximity of several major roads.)

Unfortunately, the list of chemicals originating in urban environments is long; urban streams can contain pesticides, metals, petroleum hydrocarbons, plasticizers, flame-retardants, pharmaceuticals, and more. In order to try to narrow the list of suspects, scientists from the National Oceanic and Atmospheric Administration and the United States Fish and Wildlife Service performed a spatial analysis to identify which landscape variables correlate with mortality in 6 different basins along an urban gradient in the Puget Sound.

The researchers were able to take advantage of datasets collected by other groups for planning and organization purposes. The analysis included information on land cover type and use, amount of impervious/impacted surfaces (such as roads and buildings), property type (apartment/condo, commercial, industrial, parks/open space, residential), and type of roadway (heavily used or urban/rural local access). They quantified these variables for the "area of influence" surrounding each basin; this was defined as all land draining into the focal basin and, thus, potentially contributing chemicals to the water. Mortality at each site was measured as the number of partially spawned or unspawned female carcasses found in the stream over an entire spawning season. By focusing on the females, which carry eggs in their body cavities until breeding is done, the researchers could make sure they were capturing animals that had died unusually early, rather than naturally, after a successful spawning event. 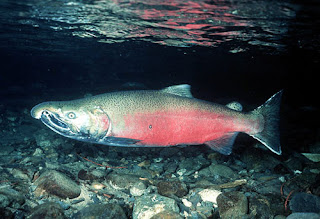 Three of the landscape variables were found to be important predictors of salmon mortality: impervious surfaces, local roads, and commercial property. Armed with this knowledge, the scientists were able to look at other, previously un-monitored, streams in the Puget Sound area and predict which were most likely to have high mortality rates. As expected, given the nature of the landscape variables, the basins with the highest predicted mortality rates were clustered around the major metropolitan areas of the eastern Puget Sound.

Although these findings do not provide definitive proof of the contaminant likely impacting the coho salmon, they narrow the list of possible suspects by highlighting the likely importance of chemicals associated with roadways--contaminants from vehicle "friction materials" such as brake pads, including copper and zinc, as well as polycyclic aromatic hydrocarbons. Further, they identify other basins of concern, though surveys will need to be conducted in order to confirm the accuracy of these predictions.

Traditionally, conservation efforts for species of concern--like the coho salmon--focus on re-establishing breeding grounds. However, the current results suggest that success of a species might not just impacted be the breeding area itself, but also the habitat that surrounds it. This means that managers may need to develop plans that cover much larger areas. If basins in urban and urbanizing habitats end up being the death of more salmon than they produce--which seems likely if females are all dying before they can lay their eggs--then they will impact coho recovery planning at local, county, and regional scales. Altogether, this suggests that conservationists will need to come up with innovative and far-reaching plans in order to save the coho salmon.

Thanks to the following websites for providing the images used in this post:
http://www.go-washington.com/overview-puget-sound/
http://www.victorialodging.com/recreation/fishing
http://www.canned-salmon.com/salmon-sustainability/salmon-life-cycle/
Posted by Caitlin Kight at 02:14