Two classically understudied topics in the disturbance/conservation literature are bacterial communities and aquatic habitats, both of which have traditionally been neglected because they are simply not as easy to study as larger organisms living on land. However, modern techniques--particularly chemical and genetic analyses--have helped make these subjects more accessible. In fact, some research has addressed both topics at once, as in a recent study that examined the effects of urbanization on stream bacteria and ecosystem function.

The work, which was conducted by collaborators from Duke University and the Colorado State University, sought to quantify differences in stream microbial communities as a function of nearby impervious surface cover. The researchers focused on 8 streams in the Raleigh-Durham area of North Carolina. Their watersheds contained anywhere from 1-39% impervious surface cover (ISC), a metric that was used to classify streams as having low (<3%), intermediate (9-10%), or high (>10%) amounts of human-related disturbance--including heavy water flow, increased stream temperatures, and inputs of contaminants and nutrients.

Composition of bacterial communities was significantly different at the 3 different levels of ISC. This was true when the researchers considered all bacteria sampled, and also when they considered genetically distinct subsets of bacteria. Specifically, they focused on two different types of "denitrifying" bacteria--species that play an important role in stream health by transforming nitrate to nitrogen gas, thus removing the nitrate from the water (if left in the water, nitrate can reduce water quality and lead to human health problems). Denitrification is a particularly important task in more urbanized streams, which often have higher nitrate levels because of the nearby use of fertilizers during landscaping and farming activities.

Previous studies have shown that the presence of heavy metal contamination in stream sediments can affect bacterial community composition--particularly among denitrifiers. Unsurprisingly, the researchers found that highly urbanized streams were significantly more likely to have nickel, and were also strongly associated with aluminum, cadmium, and lead.

Because differences in stream microbial communities could affect stream denitrification, the researchers collected soil samples from their different study sites and took them back to the lab to measure denitrification potential. To do this, they put the samples in flasks, added identical amounts of chemical-filled medium (mimicking stream water), and incubated the samples for 90 minutes. Because each flask was stoppered, nitrous oxide built up as denitrification progressed, and by measuring the amount of gas, the scientists could quantify how much denitrification had taken place. Surprisingly, despite the fact that denitrification potentials ranged hugely (from 41 to 561 ng of nitrogen per gram of sediment per hour), this variation was not related to variations in ISC. In other words, even the most urbanized streams provide adequate conditions for denitrification. 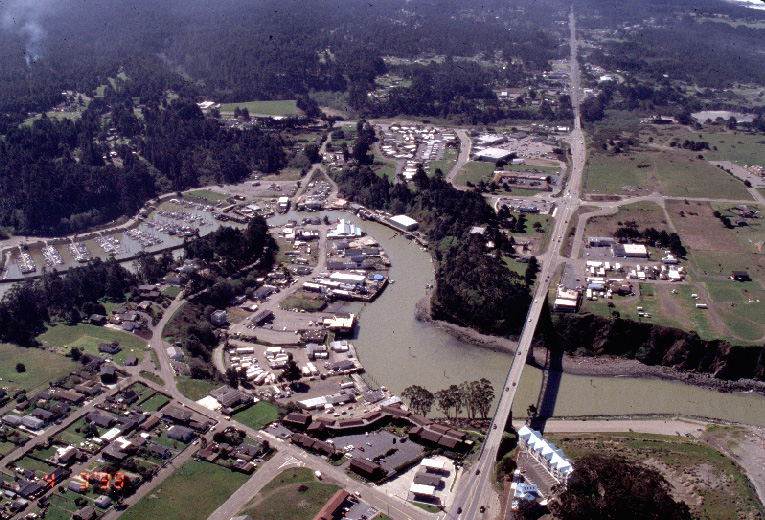 (An urbanized watershed--complete with ISC)

In the final part of the study, the scientists constructed statistical models to identify the factors with the greatest effects on denitrification potential. Possible influences included the amount of nitrate and total organic carbon in the stream water at each site, and composition of the local denitrifying bacteria community. They found that denitrification was best predicted by the composition of the nosZ bacterial community--which comprises species that accomplish denitrification using an enzyme (nitrous oxide reductase) produced by the nosZ gene (as opposed to nirK bacteria, which rely on nitrite reductase).

Cumulatively, the results of the study show that streams can vary greatly across an urban gradient, and that urban stressors are capable of driving changes in the composition of stream bacterial communities. The current results agree with patterns found during previous work in the same study sites: Amount of impervious surface cover in watersheds impacts chemical, physical, and hydrological gradients in streams, which then influence local fauna (and probably also flora, but this has not yet been reported for these focal streams).

The authors point out that it would be useful for future studies to investigate the effects of urbanization and ISC on other functional groups--for instance, bacteria involved in decomposition and carbon cycling, two other processes that are key to ecosystem health. It might also be helpful to know whether there is a disturbance threshold beyond which the nosZ bacterial communities cannot be maintained, or can no longer achieve adequate levels of denitrification. This information could be vital in predicting the effects of higher levels of ISC (e.g., >39.4%) than those observed in the watersheds examined here.

Thanks to the following websites for providing the images used in this post:
http://morriscourse.com/elements_of_ecology/basic_components_of_life.htm
http://www.krisweb.com/krisbigriver/krisdb/html/krisweb/bigriver_backgrnd/urbankr_big.htm
http://www.freefoto.com/preview/9907-05-15/Stream