Anthropogenic nitrogen sources are a major source of N pollution

Writing in the most recent issue of Frontiers in Ecology and the Environment, an international team of collaborators has described nitrogen (N) as "the largest pollution problem in coastal marine waters." Excessive amounts of N sometimes fuel blooms of algae that can outcompete or even poison other organisms, and evaporation of N into the atmosphere in the form of nitrous oxide can cause damage to our delicate ozone layer. Most of the nitrogen along our coasts is deposited there by rivers that pick up N-rich sewage, fertilizer runoff, and atmospheric deposits caused by the burning of fossil fuels; in other words, nitrogen is yet another form of anthropogenic pollution. While this has been known for a while, researchers have not always found consistent patterns relating human activity to nearby nitrogen levels. This likely stems from the variety of potential sources of anthropogenic N, and how they are influenced by climatic variables such as precipitation, temperature, and freshwater discharge. The complex interplay among these variables is exactly what the collaborators, from a variety of institutions in the US, France, Sweden, and UK, aimed to characterize in their recent study. 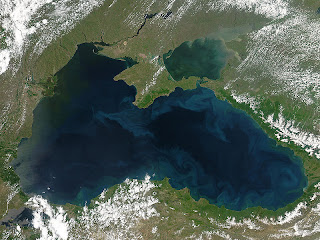 Specifically, the researchers obtained data from a number of government, environmental, and academic resources in order to characterize nitrogen flow in 154 watersheds across the US and Europe. The scientists related riverine nitrogen flux, or the total amount of N deposited by rivers into coastal waters, to "net anthropogenic nitrogen inputs" (NANI). This variable is the sum of all human-related nitrogen in the system, and takes into account N contributions from synthetic fertilizer, fixation associated with agricultural crops, atmospheric deposition from fossil fuel consumption, and the movements of both human and animal food.

Across the watersheds examined in this study, the amount of N deposited into coastal areas was significantly related to NANI, indicating that human nitrogen use is the major driver of coastal N pollution. Rivers appear capable of exporting up to approximately 25% of NANI from the landscape to coastal areas; the rest is likely retained in soils and forest biomass, or is denitrifed. However, little is known about this stage of the process and the scientists encourage future research on this topic.

In addition to investigating NANI as a single aggregate variable, the researchers also looked at the relative nitrogen contributions of each subcategory it comprises. In many watersheds, N levels were significantly related to individual anthropogenic sources of nitrogen. Fertilizer use, for instance, was highly correlated with coastal N deposition, as were agricultural fixation and atmospheric deposition. The influence of nitrogen from human and animal food was more complex. When these products were retained or introduced into a given watershed area, they were consumed by local animals and ultimately introduced into the water as a source of sewage and waste; this led to a positive relationship with coastal N deposition. However, when these products were removed in the form of crop exports, they were associated with fertilizer use and N fixation and therefore had a negative relationship with the amount of nitrogen delivered to the ocean. (Estimated N deposition from global nitrogen emissions, as of 2008. Image courtesy of Science via Mongabay.com)

Perhaps unsurprisingly, NANI was found to be significantly impacted by all three climatic variables investigated here. However, despite the statistical significance of both temperature and precipitation, neither was that useful in accurately predicting NANI levels. On the other hand, freshwater discharge, or movement of nitrogen from the landscape via local water systems, was an important predictor of NANI exportation.

However, despite the relevance of this climatic variable, the amount of N deposited into oceans seems to be more heavily influenced by anthropogenic activities. This is a valuable insight for water-quality managers, who, the researchers suggest, should focus their efforts on "field-scale agricultural practices" in locations where NANI is dominated by N fertilizer, but on waste treatments in areas where movements of human and animal foods are most important. Where data are available, it would be beneficial for managers and researchers to consider not just NANI, but also the simultaneous impacts of NANI and freshwater discharge, as the resulting "dual" models allow more precise estimates of coastal nitrogen pollution. This will be particularly important as the climate continues to change, since some regions will become wetter while others become drier. By impacting local rates of N discharge, this will alter the number of nitrogen sinks in the landscape and, ultimately, the percentage of NANI that winds up in coastal waters.

Thanks to the following websites for providing the images used in this post:
http://carbon-based-ghg.blogspot.com/2011/08/nitrogen-pollutions-little-known.html
http://news.mongabay.com/2008/0515-nitrogen.html