The April 2010 explosion of the Deepwater Horizon oil rig over the Gulf of Mexico's Macondo Prospect oil field caused conflict among a number of different parties, including oil companies, politicians, Gulf Coast residents, fishermen, people involved in the tourism industry, and conservationists. Much of the ensuing conversation focused on pinpointing who was most responsible for the catastrophe and determining how much they should pay to resolve the situation. A recent paper in the "Concepts and Questions" section of the academic journal Frontiers in Ecology and the Environment highlights the belief of many researchers that this discussion should have focused more on determining scientifically rigorous management practices that provided short-term relief from the hazards associated with the oil spill, while also preventing long-term problems stemming not only from the oil itself but also from uninformed and overly-hasty efforts to mitigate damage.

(Emergency response to the Deepwater Horizon explosion in April 2010)

The paper stems from discussions held at a workshop of the Coastal Barrier Island Network ("a multidisciplinary group concerned with the preservation of barrier islands"), and the University of Victoria's Restoration Institute. In particular, the authors dissect several emergency management efforts undertaken by the State of Louisiana beginning in May 2010. Focused on the ecologically sensitive barrier islands, plans included construction of a barrier sand berm, the blockade of several inlets, and the opening of floodgates to increase the flow of water from the islands towards the Gulf. Cumulatively, these techniques were proposed to keep oil spills away from ecologically sensitive wetlands, which are notoriously difficult to access and clean. However, while the authors of the current paper acknowledge that intentions were good, they do not see much value in any of these efforts and, in fact, worry that they may have done long-term damage to several key habitats.

In general, the Deepwater Horizon spill is thought to have had extensive negative impacts on a variety of ecosystems in the Gulf area. Although it is difficult to quantify how much oil leaked into the ocean over the 86-day period, estimates exceed 200 million gallons. The contamination is thought to have had a "three-dimensional" effect, reaching the water column, the ocean surface, and the sea floor. Cleanup is still underway and is expected to last for several years; over 100 km of shoreline is still effected by "residual oil plumes and tar balls." The movements of oceanic surface waters are notoriously hard to predict over windows of time exceeding a few days, so researchers are not sure how many other areas--including other countries--may be exposed to oil pollution in the future. 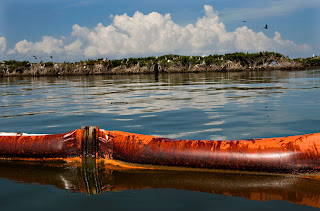 
The authors of the current paper fear that, locally at least, these general problems have only been exacerbated by Louisiana's highly-contested mitigation work. For example, opening the floodgates resulted in much higher freshwater flow rates than anticipated. Consequences included alterations in salinity and sedimentation patterns, both of which are vital characteristics determining which species, and how many, can live in the affected aquatic habitat. Changes in species communities and habitat structure can take years to reverse and may, in fact, be detrimental to other long-term conservation/preservation goals in the region.

Inappropriate management techniques can also have an economic impact. The researchers point out that sand barriers, such as those used to block the flow of contaminants and to provide an easily-cleanable substrate once the oil collected, require substantial time and supplies of sediment (over 2 million cubic meters in Louisiana alone). Because sand is already in short supply in the region, in some cases it was imported from distant sources--necessitating additional man hours and costs. Overall, the expenses associated with these efforts are not negligible. Unfortunately, barriers like these are constantly being eroded by wave action, which means that these structures will quickly disappear. Thus, the authors question whether barrier erection is really an efficient use of resources--particularly since creation of the structures will likely have long-term impacts by altering water flow routes, sediment exchange, and turbidity. It is also important to keep in mind that any positive effects observed locally may not be seen at a broader scale. Louisiana's techniques may have reduced the amount of oil that reached the shores of its barrier islands, but they increased toxins in nearby oyster hatcheries. As a result, oyster recruitment was "devastated" and fishermen will likely have drastically reduced harvests for at least 3 years.

(In some places, such as Florida's Perdido Key State Park, heavy machinery was brought in to remove oil-covered waters and sediments.)


As the authors point out, mitigation and restoration plans are a tricky business, requiring a difficult balance of environmental and socioeconomic benefits; furthermore, environmental benefits must be measured over both the short- and long-term, and reaching favorable outcomes over both periods is not always easy. They strongly suggest that the development of management plans should be divorced from politics, and instead should be guided by scientific evidence about which techniques are most helpful and, therefore, are most likely to be cost-effective. Although they do not condone some of the hasty work performed in the wake of the Deepwater Horizon spill, the authors encourage researchers to take advantage of the opportunity raised by these efforts to examine the implications of those practices over different time scales. The researchers feel that, in the future, the burden of ecological risk should be shifted to the oil companies who are ultimately responsible for exposing the environment to oil and other contaminants. However, the authors also urge scientists and managers to be better prepared for future events so that they can hit the ground running with mitigation efforts rather than being overwhelmed by the "shock" of the environmental emergency.

Thanks to the following websites for providing the images used in this post:
http://en.wikipedia.org/wiki/Deepwater_Horizon
http://robinloznakphotography.blogspot.com/2010_06_01_archive.html
http://www.zimbio.com/pictures/u9eCZAsTI15/Beach+Clean+Up+Oil+Spill+Continues+Ahead+Florida
Posted by Caitlin Kight at 06:33