Close ties between economy and environment put flamingos at risk

Anthropogenic habitat modifications associated with economic enterprises often have negative implications for wildlife. One exception to this general rule is the success story of greater flamingos (Phoenicopterus roseus) in the Etang du Fangassier, France. There, the creation of extensive salt flats provided the birds with the saline areas they require for feeding and breeding, while buffering them from the "hydrological stochasticity" characteristic of more natural versions of their habitats. In fact, breeding success is almost twice as high for flamingos breeding in salt pan areas compared to those in nearby less disturbed habitats, and fledglings from the Etang du Fangassier make up nearly half of the new growth observed in Mediterranean and West African populations of this species. 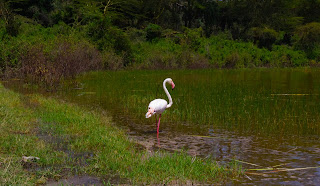 Flamingos are just one of many organisms that, in some locations at least, depend on anthropogenic activities to provide them with key habitats and other resources. Unfortunately, when these activities are no longer economically viable, there can be environmental consequences that put sensitive species at risk. This was recently highlighted in a "comment" published in Environmental Conservation by a group of French and Spanish flamingo researchers who suggested that the situation in the Camargue should be used as a case study to understand the important link between economy and environment. They described how, in 2007, greater flamingos in the Etang du Fangassier experienced their first breeding failure since 1974 in the wake of financial crises that led to alterations in the salt pan economy. Decreased salt production, reductions in employee numbers, and selling of land all contributed to decreases in habitat suitability, preventing vital flooding needed to create feeding pools and literally leaving the flamingos high and dry.

The salt pans around the Etang du Fangassier are run by the Salins Group, a corporation that underwent multiple "leverage buy outs" from 1997 onwards. LBOs are plans that help financial groups purchase entire firms; they are generally associated with high levels of debt that put companies at risk. Also at risk are the companies' lands and land management activities: The Salins Group were ultimately forced to put 9000 hectares of salt pans up for sale in order to cover costs. This land provides essential feeding areas for flamingos and any changes to the habitat could prove catastrophic for these sensitive birds. (Satellite image of the Etang du Fangassier, in the Camargue region of France)

Flamingos in the Camargue exist in what is known as a "metapopulation," or a large group comprising many pockets of individuals that migrate to and from small patches of suitable habitat within a larger geographical area. Removal or alteration of one of these pockets--such as the Etang du Fangassier--can have serious implications for individuals living in the others. This is particularly true for flamingos, who appear to require a critical population mass before they feel comfortable breeding, and whose dietary needs are so specific that they need many choices of potential feeding areas at any given time in order to locate one that provides the exact characteristics they are looking for. Of course, other waterbird species--particularly those that need or benefit from remote nesting areas--are also likely to be negatively impacted by changes in the Camargue hydrology and land use.

According to the authors, another concern is the potential that environmental problems will be exacerbated by an interplay between economic problems and those associated with climate change. In coastal wetland areas such as those required by flamingos, for instance, changes in rainfall and sea level could both have catastrophic effects; reductions in rain could prevent feeding pools from forming, while higher sea levels could cause flooding that washes away the birds' mud nests or prevents them from ever being built. These are problems that can, to some extent, be mitigated by human management efforts, but only if there are sufficient funds available to pay for conservation activities.

(Flock of greater flamingos in the Etang du Fangassier)

On the whole, the flamingo situation indicates that not only land use patterns, but also "financial agendas" can have significant impacts on conservation efforts. The authors suggest that it would be beneficial to "divert financial volatility from sustainable economic activities" so that particular vital habitats and management schemes will be stable over the long term. This would provide a buffer for both land holdings and the species that live on them in the event that future financial crises threaten global markets.

Thanks to the following websites for providing the images used in this post:
http://earthobservatory.nasa.gov/IOTD/view.php?id=7985
http://en.tourduvalat.org/dossiers/flamants_roses/flamants_roses_en_camargue
Posted by Caitlin Kight at 03:34