Rethinking marine acoustic ecology research: is it time for a change?

Conservationists and managers are always looking to collect more and better data in order to verify that their policies are appropriate and biologically sound. This is particularly true when the policies are applied in environments undergoing rapid or constant change, and when those policies were originally based on relatively small amounts of data--two descriptions that reflect the situation in marine habitats exposed to anthropogenic noise. 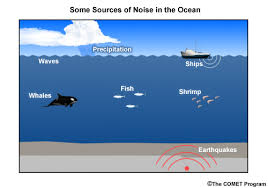 
According to a team of bioacousticians writing in the most recent issue of Conservation Biology, most current marine regulations assume that the effects of noise are linked, in a dose-dependent manner, to the strength of the sound pressure level received by the animal. As a result, policies are developed using a "zones of influence concept," in which there are concentric rings centered on a sound source; animals positioned in the inner rings should suffer the most intense damage, while those in increasingly distant rings should suffer less damage. "Damage," in this case, is usually thought of as being predominantly physical, ranging from death and burst air bladders to permanent or temporary shifts in hearing thresholds (or, in other words, deafness).

But, the authors argue, studies in terrestrial environments have clearly shown that noise can have more subtle, but equally important, effects on wildlife. For instance, abundance and diversity may shift as animals flee from, or learn to avoid, particularly noisy areas; individuals may alter their behaviors in counterproductive or even dangerous ways; and noise may make important acoustic signals difficult to hear, even in the absence of actual deafness. In short, the researchers write, the current marine noise concept "ignores a diverse suite of environmental, biological, and operation factors" that can impact both perception of, and response to, anthropogenic noise. Thus, they argue, it is necessary to overhaul the system and "[incorporate] context into behavioral-response assessment."


In a previous study on behavioral responses of marine animals to noise, one of the authors of the current paper found that the "zones-of-influence approach did not reliably predict animal responses." Furthermore, we know from terrestrial studies that a variety of additional factors--an animal's past experience and conditioning, current behavioral state, acoustic environment, and type of exposure, to name a few--all affect the extent to which it will be impacted by noise pollution. Preliminary work in marine environments suggest these are also important factors for aquatic animals. A study on migrating gray whales (Eschrichtius robustus), for instance, found that the whales' orientations relative to the sound source were at least as important as actual noise level in determining their responses to acoustic stimuli.

One of the most fundamental pieces of information needed to gauge the impacts of noise pollution is the hearing sensitivity of each exposed animal, since, although loud noise can cause physical damage to any organism, it should result in behavioral adjustments only in those species that can hear it. A further consideration is the signal-to-noise ratio, or the amplitude of a sound relative to other background noises. It is also important to consider the fact that many animals are particularly attuned to some sounds or sound characteristics--those associated with particularly dangerous predators, for example, or with the mating calls of other individuals of its species. Animals are likely to be particularly susceptible to noise pollution that overlaps with these areas of sensitivity.


Studies of the effects of anthropogenic marine noise rely on the accurate measurement of noise disturbance events. There are a variety of ways in which to measure sound levels, and the authors caution researchers to choose wisely. In studies of "impulsive" sources of sound such as airguns, for instance, it would be inappropriate to use a methodology that attempts to obtain an average level of the signal. That may sound obvious for a short, "peaky" signal, and yet it's not an uncommon practice to use the root-mean-squared metric, which does just that, when investigating some impulsive noise events. Other characteristics, such as the signal's peak value, may be better predictors of animals' behavioral responses to noise pollution. Further, while many studies have assumed that sound transmission will be consistent during a single anthropogenic noise event, or from one event to the next, this is not always true--the presence of additional background sounds may vary for other reasons (stormy weather, for instance, or the delivery of noisy sexual advertisement calls by breeding fish), and changes to the physical structure of the habitat can also alter sound propagation. 
In order to incorporate all of these additional factors into both scientific studies and the management plans that are developed from them, the researchers suggest that it is important to measure animal responses to both absolute and relative levels of noise. This would enable simultaneous evaluation of physical effects, auditory masking, and behavioral annoyance. The authors argue that, at the high end of the absolute noise spectrum, animals should still respond to noise in a dose-dependent manner--for example, in terms of physical damage caused by noise. However, at more moderate levels of noise that are likely to elicit a behavioral response, they suggest it would be more appropriate to focus on relative noise levels and the context in which animals receive them. Because there "is no simple boundary" between the dose-response and context-dependent categories, they further advise use of a weighted combination of these two metrics.

The end product of this re-vamping of marine acoustics work would be a better understanding not just of the acute impacts of noise, but also of the effects of chronic exposure to underwater anthropogenic sound. Given how important the latter category has proven to be in terrestrial environments, additional work on this topic in aquatic environments should prove illuminating. The introduction of additional variables to measure may require more time and energy, but the researchers hope that it will lead to a reduction in uncertainty associated with "assessment, management, and mitigation."


Thanks to the following websites for providing the images used in this post:
http://meted.ucar.edu
http://www.marineinsight.com/marine/environment/effects-of-noise-pollution-from-ships-on-marine-life/
http://www.wired.com/wiredscience/2010/06/fish-and-noise/