Can you save a threatened species by hunting it?

It seems counterintuitive to think that hunting a threatened species could actually help conserve it, since conservation efforts usually aim to increase and stabilize populations. However, hunting can be a lucrative business, generating funding that both fuels management efforts and keeps locals more inclined to tolerate the presence of animals that would be considered a nuisance if they weren't so economically useful. Perhaps even more important is the fact that land that is set aside as habitat for human prey remains undeveloped, providing a home to many other species of wildlife as well as to populations of the individuals being hunted. Given these considerations, would be it be wise to pursue bans on lion (Panthera leo) trophy hunting in Africa, as recently suggested by animal welfare activists in both the US and Europe, or would such a moratorium do more harm than good? 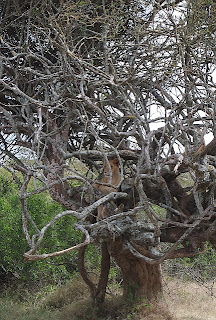 (Lion, Panthera leo, lounging in a tree in the Solio Game Reserve, Kenya)

This was the fundamental question recently investigated by a group of international collaborators from South Africa, Zimbabwe, and the US. Writing in PLoS ONE, they describe a set of economic analyses they used to understand the complexities of the trophy hunting industry. The researchers collected information on hunting from both an online site where safari customers can submit hunt reports, and from websites of, and interviews with, safari operators themselves. These data were subjected to a series of calculations ultimately allowing the researchers to measure the return on investment, or ROI, of lion hunting under 3 different scenarios: current lion off-takes, lion off-takes reduced to a maximum of 5 animals per 1000 square kilometers, and no off-takes at all (e.g., a complete ban of lion hunting throughout Africa).
Because of regional differences in hunting practices and prices, the analysis was conducted on a per-country basis. This revealed that both prices and "key species" vary regionally--a pattern likely driven by a number of factors such as the length of the safari, the availability and identity of potential prey species (the most popular of which are generally lions, elephants, leopards, buffalo, and rare antelopes), and the number and type of supplies needed to reach hunting habitats. The most expensive hunts were those a) in Tanzania and b) involving lions. Safari prices are increasing most swiftly in Botswana, and for leopard and lion hunts; the latter trend may be driven by hunters' desire to shoot these increasingly rare animals while they are still available. In countries where hunting is most intense, a few key species generate the largest proportion of hunting income: elephants, in Mozambique, Namibia, and Zimbabwe; buffaloes, in Tanzania, and sable antelopes, in Zambia. Lions generate the highest mean percentage of overall income in Mozambique, Tanzania, and Zambia, but have the "greatest proportional impact" on incomes in Mozambique and Zambia. This is probably not surprising given that customers sometimes pay up to $140,000 per hunt.

ROIs for safari operations were highest in Tanzania, Namibia, and Zimbabwe--the same countries in which gross incomes from trophy hunting were highest per square kilometer of space. Interestingly, the presence of lions on quota had a markedly higher effect on net income than on gross income, indicating that this species plays an important role in how much money safari operators take home at the end of the day once all other tariffs and expenses are subtracted. As a result of this influence, completely banning lion hunting had a much greater economic impact than simply reducing takes to 5 individuals per square kilometer. Indeed, paychecks would not be the only thing impacted by an outright moratorium: The authors calculate that it would render safaris economically nonviable across massive amounts of land--amounting to a total of approximately 60,000 square kilometers (or ~4 times the size of Serengeti National Park) across Tanzania, Zambia, Zimbabwe, and Mozambique alone. On the other hand, merely reducing lion off-takes would likely put safaris out of business across ~7,000 square kilometers.

Although the researchers had to make some assumptions while collecting their data--for instance, that hunters did not falsify records of takes and that safari operators accurately reported their finances--the analyses appear to be robust. While the local importance of lions varies depending on their own availability and on the quotas and availabilities of other game species, the patterns reported here suggest that a lion hunting moratorium would have catastrophic economic repercussions across much of Africa. If locals respond by resorting to poaching, altering habitat use, or ending funding of management efforts, then ultimately lion populations (as well as those of other species) might suffer just as much, or even more than, if hunting had continued. 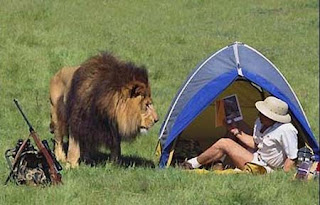 (How not to hunt a lion)


One factor the authors were not yet able to take into account was the influence of cheap but high-quality trophies supplied by captive-bred animals. The availability of this relatively new alternative option may ease pressures on wild lions, but it is too early to tell. Meanwhile, the researchers conclude that "blanket restrictions" on lion hunting would, in addition to potentially putting wild lion populations at risk, unfairly punish countries where safaris are being conducted in a conservationally responsible manner. As an alternative, they suggest reducing quotas in order to improve the sustainability of hunting. Because "lion populations recover quickly when the pressure of excessive harvests is removed" (as recently seen in Zimbabwe after a hunting ban from 2005-2008), this management option may be one way to balance the interests of both humans and cats.

http://freeimagegallary5.blogspot.com/2012/01/lion-hunting-beautiful-lion-hunting.html
Posted by Caitlin Kight at 06:08