It’s not every day that serious scientific research revolves around the ability of a trained dog to sniff out whale poo floating on the ocean’s surface, but that is only one of several ways in which a recent study breaks new ground. The work, performed by collaborators from a variety of institutions from across the U.S., also took advantage of an international tragedy to provide data that might help prevent a natural tragedy, and provides some of the most unambiguous support to date for the hypothesis that anthropogenic noise is bad for wildlife because it increases their stress levels.

The international tragedy in question is the bombing of the World Trade Center on September 11, 2001. In the days that followed, ship traffic decreased markedly in (among other places) the Bay of Fundy, home to a right whale (Eubalaena glacialis) conservation area. During this period, researchers were already on site collecting both acoustic data and fecal samples—the latter of which were located using detection dogs whose sensitive noses guided the researchers close enough to use dipnets to scoop samples out of the water.

(A right whale, Eubalaena glacialis, in the anthropogenically disturbed Bay of Fundy)

Although these data were intended for use in other studies, it occurred to the researchers that they could use this opportunity to test a long-standing but generally poorly-studied theory that the sound of boat traffic is stressful for acoustically sensitive marine species. To do this, the scientists re-visited the Bay during the next 4 years in order to collect additional fecal samples. By conducting their field work at the same time of year, they produced a dataset allowing them to compare seasonal variation in stress hormone levels both within a single year and among multiple years. Thus, they could examine whether any potential reductions in stress levels after 9/11 were simply a result of normal seasonal fluctuations, or were more likely a response to variation in ambient noise levels.

Noise levels in the Bay of Fundy were found to decrease by 6 dB in the wake of 9/11. There was a particularly noticeable drop-off in the amplitude of noises at low frequencies—in other words, the frequencies to which whales are particularly attuned. This was predominantly caused by a one-third reduction in ship traffic following the World Trade Center bombing. Fecal sample analyses revealed that, in “normal” years, whale stress hormones generally rise throughout the autumn; this corresponds to increasing courtship activity during this period. In 2001, however, there was a significant decrease in hormone levels just after 9/11, suggesting that the whales were “released” from the added stressor of anthropogenic noise. 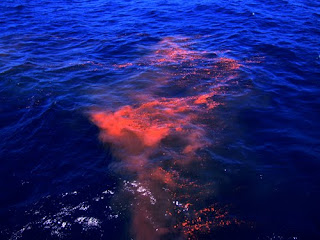 (Whale poo--in this case, from a blue whale, Balaenoptera musculus. It floats because of its high nitrogen content.)

The researchers are quick to admit that “this is a retrospective analysis based on a non-repeatable event with all of the inherent limitations.” However, despite the unplanned nature of their study, and the lack of comparative acoustic recordings during the 2002-2005 portion of the research period, their work is still an improvement on previous studies of noise-related stress in marine animals. As the authors themselves state, the results “provide compelling evidence of a stress response in right whales exposed to…underwater noise from ship traffic”—an intriguing glimpse of the more subtle impacts of human activities on wildlife. In addition to conducting further research to verify the patterns reported here, it will also be important to determine the long-term and population-level consequences of stress responses to anthropogenic sound pollution.

Thanks to the following websites for providing the images used in this post:
http://envs1020ko.blogspot.com/2010/10/whales-doing-their-part-to-recycle.html
http://news.sciencemag.org/sciencenow/2012/02/shhh-ocean-noises-stress-out-wha.html
Posted by Caitlin Kight at 10:29