When it comes to improving global air quality and reversing anthropogenic changes to the climate, we don't exactly have much room for error: Experimentation with ultimately unhelpful management techniques could waste precious time and resources, and might even do further damage. Luckily, climatologists and meteorologists have developed increasingly precise mathematical models that allow researchers to predict the impacts of one control measure or another, or even multiple measures performed simultaneously.

Case in point: recent work by a team of collaborators hailing from a staggering 13 institutions from around the globe. The researchers studied the efficacy of proposed techniques to reduce tropospheric ozone and black carbon (BC) emissions in the atmosphere. As discussed previously in another recent Anthrophysis post, stratospheric ozone helps protect us from the sun's harmful rays, but trophospheric ozone--levels of which are greatly increased by anthropogenic pollutants such as methane--can have negative impacts on the health of humans and agricultural crops. Black carbon, on the other hand, is pure carbon that results from incomplete combustion associated with vehicles, stoves, and kilns, to name but a few sources. 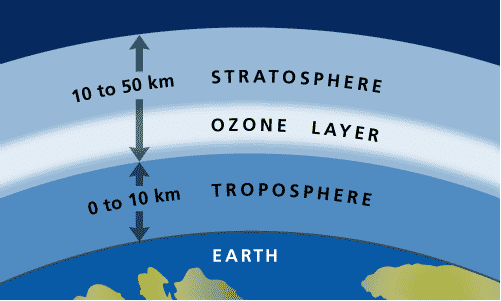 (Where ozone should be--the stratosphere--and where it is often found as a result of anthropogenic pollution--the troposphere).


A number of strategies have been proposed to reduce both ozone and BC pollution. In the first part of their study, the researchers sifted through approximately 400 management proposals in order to identify 14 (7 per pollutant) with the greatest benefits. This was achieved using computer models that utilized regional data on the success of already-implemented strategies to project the consequences of following these protocols over the long term. The models indicated that, in order to reduce ozone levels, managers should target methane emissions from coal mining, oil and gas production, long-distance gas transmission, management of both human and livestock waste, and rice paddies. BC emissions, on the other hand, could be minimized by regulating vehicles, stoves, kilns, waste-burning, and cooking/heating activities. Additional modeling revealed that policies that simultaneously target methane, BC, and carbon dioxide could limit global warming to <2 degrees Celsius over the next 60 years--a degree of success (no pun intended) not achieved by targeting any of those pollutants individually. (Figure A is a microscope image of sulfates (the round particles) and black carbon (the chains identified by all the arrows). Figure B shows an enlarged view of black carbon, while figure C indicates "fly ash," a product of incomplete coal combustion that is often found in association with black coal.)


Next, the scientists shifted gears from a global perspective to a regional one, in order to model the potential climate impacts of the proposed management policies at national levels--an important step because this is the scale at which most regulations are selected and enforced. One of the most noticeable and widespread results of the measures was a reduction of albedo, or light reflection from the earth's surface. This would be especially noticeable over bright areas such as the Himalayas and the Arctic, and would reduce snow and ice melting. Another prominent pattern was a change in precipitation; this was predicted for southern Asia, western Africa, and Europe, where it would likely reduce the risk of drought. On average, these regulations could prevent approximately 0.5 degrees C of global warning by 2050.

In the final portion of their study, the researchers estimated the economic benefits of ozone and BC regulation measures. Ozone-reducing policies aimed at reducing methane emissions could save $331 billion associated with climate impacts, $4.2 billion in crop impacts, and $148 in health impacts; BC policies could save $225 in climate impacts, $4 billion in crop impacts, and an impressive $5142 billion in health impacts--not to mention saving approximately 373,000 lives per year. The benefits of different emissions goals vary on a country-by-country basis. For instance, China stands to gain most from regulation of pollution associated with coal mining and municipal waste, while Central Africa, the Mid-East, and Russia would have the greatest results from regulation of oil and gas production. However, the benefit of avoided global warming was shared equally by all regions.

(The models in the current study indicate that the cryosphere would benefit most from BC regulations. Although the Himalayas and the Arctic were identified as areas where snow and ice melting would be particularly reduced as a result of decreases in albedo, many other countries have "cryospheric components" and thus would stand to gain from the stemming of BC emissions.)


Broadly speaking, ozone-reducing methane regulations achieve climate and agricultural improvements, while BC regulations are more helpful for climate, "cryosphere" maintenance (e.g., preservation of snow and ice), and human health; these patterns have consistently been predicted by multiple different models. Although ozone and BC policies are each useful individually, the authors stress that the greatest climate and economic benefits will derive from simultaneous implementation of both. Further, the scientists point out that these are "distinct from and complementary to carbon dioxide measures," and so a thorough emissions-reducing plan should target all three pollutants.


Thanks to the following webpages for providing the images used in this post:
http://schoolworkhelper.net/2011/06/ozone-overview-facts/
http://www.nasa.gov/topics/earth/features/warming_aerosols.html
http://geo-cryosphere.org/what_is_cryosphere.html