Among birds that have suffered declines as a result of anthropogenic activities, grassland species have been particularly hard hit. They have lost significant portions of their habitat as humans convert meadows to pastureland and agricultural fields. Although birds can still utilize these new types of grassland, they are often disturbed by early and frequent mowing regimes that disrupt their breeding season by destroying nests and killing or injuring both nestlings and incubating females.


One of several declining European grassland species is the whinchat (Saxicola rubetra), whose last healthy populations on the continent can be found in traditionally-managed cultivated fields in Alpine valleys. Unfortunately, mowing and harvesting activities are becoming increasingly more intense in these areas, putting the whinchats at serious risk. Researchers are currently looking for short-term measures, such as nest marking and delayed mowing, that will keep the whinchats safe until the Swiss government adopts policies giving this species official protection.

The efficacy of both of these techniques was recently investigated by scientists from the Swiss Ornithological Institute, working in the Inner-Alpine Engandine valley in Switzerland. Mowing practices have been recorded in this area since the late 1980's; researchers have noted increasingly early mowing dates (by 10-20 days) and larger size of mown patches. The government funds set-asides in a portion of the valley--mostly on the slopes--where whinchats can get a reprieve from mowing until at least the first of July. The authors considered these to be "delayed mown areas," contrasting with more intensely agricultural fields (or "early mown areas," mostly at the bottom of the valley) that are mown prior to July. 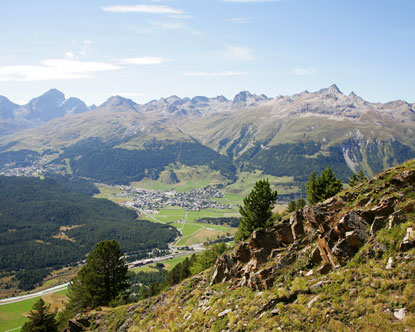 (Switzerland's beautiful Engandine Valley, where the current study was conducted)


In both types of meadow, the researchers performed territory mapping in order to identify the location of active nests. These were demarcated by two wooden stakes placed 10 m away from each nest, allowing farmers to preserve 10 x 10 m nesting patches during mowing efforts. To further help farmers identify protected breeding spots, the researchers also verbally informed them of all nest locations. Nests were revisited periodically so that nestling survival could be quantified throughout the nesting period; the last visit occurred once all remaining chicks had fledged. In addition to collecting data on basic life history characteristics such as laying date of first egg and clutch size, the researchers also used the census data to evaluate nest survival under each of four different management regimes: protected or not protected in either early-mown or late-mown fields.

Over the course of the 3-year study period, the researchers located 104 whinchat nests, of which 78 were early-mown and 26 were late-mown. Marking was performed for 31 nests in the former category, but only 6 in the latter. As hoped, nest survival was very high for marked nests. Nests in early-mown fields had the lowest survival probability, and, for obvious reasons, nest mortality was highest in the period when mowing was performed. Lest anyone suggest that nest failures resulted from non-mowing activities, the researchers documented the causes of each nest failure: Mowing was responsible for 71.4% of failures, predation for another 23.8%, and death of a parent for 4.8%. For this population of whinchats, then, mowing was the biggest threat to a successful nesting attempt. (Whinchat nest, hidden in the grass)


Unsurprisingly, females at higher altitudes initiated their egg-laying activities later in the season, with a 0.7-day delay per every 100-m increase in altitude. This means that early and late mowing regimes will likely have altitude-dependent impacts on nesting whinchats. The researchers also observed that first clutches were larger than replacement clutches, indicating that breeders who lose their first nests to mowing activities will probably produce fewer total offspring per breeding season--assuming their second nest is not also destroyed by mowing. However, in early-mown areas, replacement broods had higher survival probabilities, indicating that the relationship between breeding and mowing activities can be relatively complex.

Based on their measurements of nest survivorship, the scientists calculated that late mowing and nest marking efforts could each nearly double the whinchat population growth rate; rates would be even higher if these management techniques also prevent female mortality. Because nest marking is labor-, time-, and cost-intensive, late mowing may be the more practical method of helping whinchats and other grassland-breeding bird species. However, the researchers suggest that it might be a good idea to employ both protection techniques just to be safe.

(Whinchat chicks dozing in their nest)


Two important issues not addressed in the current study are post-fledging chick survival and the potential impacts of mowing on overall habitat quality. Fledged chicks may respond to danger by crouching and remaining immobile in the grass--a tactic that is much more effective in higher grass than in areas mown short; thus, predation rates may be higher in intensively managed grasslands. Mowing also alters plant density and height, which could reduce the availability of food. The relevance of these two issues needs to be investigated with additional studies. However, it appears likely that, while nest protection and late mowing may have short-term benefits to breeding whinchats, long-term conservation plans should incorporate other techniques aimed at these problems, as well.

---
For additional photos associated with this blog, visit the Anthrophysis pin board on Pinterest.


Thanks to the following websites for providing the images used in this post:
http://www.unifr.ch/biol/ecology/bersier/communityecology/index.html
http://www.destination360.com/europe/switzerland/engadine-valley
http://www.flickr.com/photos/nottsexminer/galleries/72157626936537746#photo_5718185353
http://www.davidnorman.org.uk/MRG/Nest%20miscellany%20II.htm
Posted by Caitlin Kight at 10:18