Over the past several decades, a growing number of studies have linked declines in biodiversity and abundance--especially of birds--with intensification of agricultural practices. Replacement of uncultivated areas with farm fields, use of pesticides, increases in monocultures, and earlier harvesting dates have all been associated with reductions in the quality of hunting/nesting habitats, reproductive failure, mortality of individual birds, and increased heterogeneity of bird communities.

However, as has been discussed in previous posts, not all animals respond to anthropogenic disturbance in the same way. Thus, it is likely that some species might not be negatively impacted by agricultural practices--in fact, they might benefit from them. For instance, species that depend on wetlands might thrive in agricultural areas where the use of irrigation has created artificial ponds and wetlands that either generate new habitats or replace those that were previously lost to agricultural expansion. 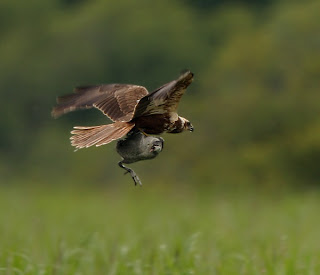 This appears to be the case among marsh harriers (Circus aeruginosus) in the Catalan Ebro basin, an agricultural area in the Iberian Peninsula. The harriers declined in Europe between 1960 and 1980 because of pesticide contamination, hunting, and heavy drainage of the wetlands where they breed. Harrier populations have been recovering in recent decades, to the point where they are actually increasing their geographic range in some locations. These improvements appear to be linked with the birds' use of artificial ponds/reservoirs created by local farmers. 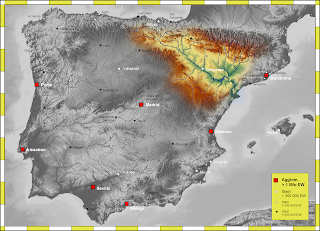 (Map outlining the Ebro Basin area of the Iberian Peninsula. Traditionally, agriculture here included extensive cultivation of cereal crops separated by field margins; fallow grounds were allowed to rest for one or more years, during which time they were used for grazing of livestock. During the 20th century, however, farming practices changed: A variety of alternative crops became popular, irrigation systems were established, and both the fallow system and field margins were eliminated. Currently, the region is an "agricultural mosaic" composed of arable, non-irrigated cereal crops, irrigated fields, dry fruit trees, and irrigated fruit trees.)

To investigate this hypothesis, researchers from the Universitat de Barcelona, the Estación Biológica de Doñana, and the Universidad Pablo de Olavide monitored breeding marsh harriers from 1997-2008 and measured habitat variables within and around wetlands where the birds were found nesting. Parameters of interest included type of habitat (e.g., artificial pond vs. reservoir vs. river, etc.), amount of vegetation in the wetland, shape of the wetland, amount of open water, type of agriculture associated with the wetland, and proximity to anthropogenic structures such as villages and roads.

Of the 617 total wetlands in the study area, only 51 had the minimum requirements that made them suitable for marsh harrier breeding. Of these, 68% were artificial water bodies associated with agricultural irrigation. Approximately 69% of these wetlands were occupied at least once during the study. 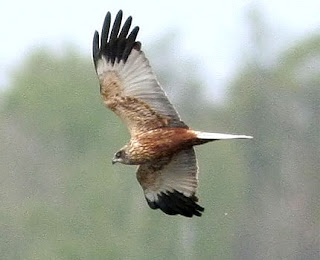 Features of both the immediate (within-wetland) and extended (within a 3-km radius of the wetland) environment were associated with chosen breeding territories: Marsh harriers seemed to strongly prefer habitats with higher areas of aquatic vegetation; they were also drawn to wetlands near agricultural fields with highly irrigated herbaceous crops. The importance of these two levels of habitat features--both near to, and far from, the nesting site--suggests that the birds are satisfied not only with the apparent safety of the breeding ground, but also with the likelihood that they will find sufficient prey in the nearby fields. The fact that they are particularly drawn towards heavily managed cropland indicates that the birds are not being scared off by anthropogenic activities. Even better, the researchers did not find any relationship between habitat attributes and productivity. In other words, harriers in agricultural areas are not suffering reduced breeding success because of their fondness for artificial wetlands.

The scientists suggest that one of the reasons harriers may thrive in anthropogenic areas is the constant wetness due to influx of water from irrigation; in natural environments, wetlands often dry out during spring and summer because they are not continually supplied with fresh water. The authors also point out how the current results support previous findings suggesting that marsh harriers are able to find an abundance of prey in "agriculturally intense" habitats. However, neither study was able to document specifics related to harrier hunting practices, so more data will need to be collected--how far the birds fly, which areas of the habitat they use, what species they are eating--in order to explain the mechanisms behind their apparent success in anthropogenic areas.

Raptors such as the marsh harrier are often used as bioindicators--species whose population trends reflect the health of an ecosystem--because they are at the top of the food chain. This study shows that at least some raptors can adapt to the presence of humans; thus, this group of animals may not uniformly be good at providing early warnings of habitat degradation. However, the researchers point out that "finer cues" such as individual health and survival might indicate forms of ecosystem degradation that were not studied here--including water pollution and pesticide use. This is another possibility that will require attention in future studies.