In 2001, researchers estimated that there were 400 million dogs worldwide, 75 million of which were owned in the U.S. alone. Despite this abundance of canine companions, little is known about the ecological impacts of domestic dogs or which native species they are most likely to interact with and influence. For the most part, pet dogs are not very good hunters, but they are very interested in, and good at, giving chase to perceived prey; even when leashes prevent this sort of disturbance, the mere sight or smell of dogs may cause non-lethal, fear-based alterations in behavior, habitat use, and physiology among wild animals. These are likely to be particularly problematic in designated wildlife areas, where human (and accompanying dog) use is allowed, but where the primary objective is to provide habitat for species that otherwise might not thrive in anthropogenically altered environments. 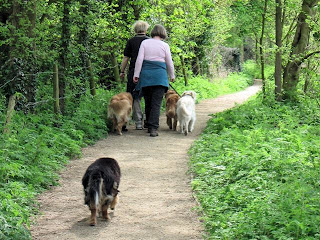 (Walking dogs along nature trails: It might be good for your health and theirs, but what about the health of native animals?)


In order to investigate how the presence of domestic dog impacts habitat use among native animals, collaborators from Colorado State University and Boulder County Parks and Open Space used 5 sampling techniques across 4 sites (2 that allow dogs and 2 that do not) to identify which species could be found near wilderness trails, what their activity levels were, and whether these factors were influenced by the presence of dogs. First, they surveyed pellet plots, areas where rabbit and deer pellets could be counted in order to determine how many individuals had trafficked the area. Second, they used track plates, talc-coated platforms on which footprints were recorded after animals came to investigate a lure. Third, they installed remote-triggered cameras, also baited, in order to photograph animal activity along the trails. While the track plates primarily targeted both mid-sized carnivores and small mammals, the remote-triggered cameras were aimed at documenting the former. Fourth, because mammalogists seemingly can't get enough of poo, the researchers conducted on-trail scat surveys at each site. Finally, they measured the distance to, and density of, prairie dog burrows near trails. 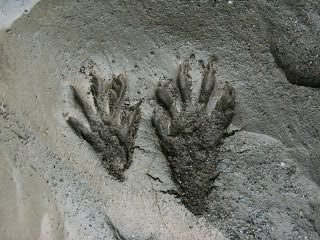 (Tracks of a raccoon, Procyon lotor)

Cumulatively, the results indicate that the presence of dogs alters the abundance and activity of native mammals near the nature trails, but that the impact of the dogs lessens with increasing perpendicular distance from the trail. For instance, mule deer and rabbits were less active along trails where dogs were allowed, an effect that was generally more intense within 5 m of the trail than >50 m. A similar pattern was found for the density of prairie dog burrows, which was impacted within 25 m of the trails, but not at greater distances. On trails that allowed dogs, there were higher activity levels for native canids such as coyotes and red foxes, but lower levels of bobcat and rabbit activity. This suggests that while some animals may increase their presence near the trails in order to come investigate scent marks left by dogs, other animals may perceive dogs as a threat, and instead choose to stay farther away.

Altogether, these findings suggest that the quality of wildlife habitat may be negatively impacted by policies permitting the presence of dogs. In areas where dogs were allowed off leashes, they were found to wander as far as 85 m off the trail, meaning that significant portions of the wildlife areas might be considered unsuitable habitat by deer and small mammals that perceive dogs as potential predators. This effect could be compounded by high trail densities. In addition to the spatial effects seen here, dogs are likely to cause alterations in the temporal aspects of animal behavior--for instance, causing some animals to completely avoid trails between dawn and dusk, when dogs are most likely to be encountered. 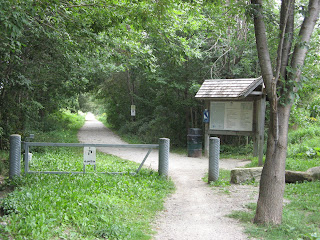 In the future, wildlife managers might want to enforce no-dog policies in natural areas--particularly those that have been set aside as refuges for the small animals that are most likely to regard dogs as a threat. In areas where they are allowed, it might be a good idea if owners are required to their pets on a lead in order to minimize the area through which dogs can run and scent-mark. This is particularly important if dogs are important disease vectors--an issue that has not yet received much attention.