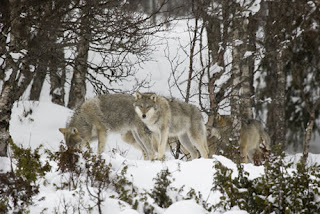 Trends often emerge in biological research, with several papers on a similar topic being released over short periods of time. This seems to be the case for poaching, which I wrote about last week. That post covered the development of new survey techniques that more accurately estimate poaching rates among groups of potential hunters—in that case, South African farmers. Just a couple days later, a new study was published in which collaborators from the Swedish University of Agricultural Sciences, Hedmark University College, the Norwegian Institute for Nature Research, and Colorado State University reported on their use of mathematical modeling to explore the concept of “cryptic poaching” and measure its potential impacts on conservation efforts among Scandinavian wolves  (C