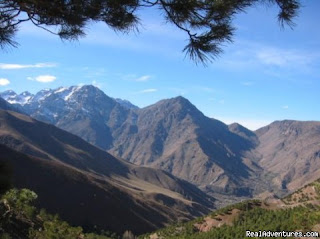 Although ecotourism may benefit wildlife by creating an economic incentive for protecting individual species and their habitat, it may also have some drawbacks. Even in environments where tourist-animal interactions are regulated, the presence of humans and the noise they make may increase animals' stress levels, which can have long-term impacts on the health, survival, and reproductive success of wildlife.

This was recently explored in a study on Barbary macaques (Macaca sylvanus) living in Ifrane National Park in the Middle Atlas Mountains of Morocco. The macaques, of which there are fewer than 10,000 individuals in the wild, are the only free-living non-human primates living in North Africa; they were classified as endangered in 2008. Their habitat is a popular tourist destination both for visitors seeking to spend their afternoon picnicking in the park and for individuals who have come exclusively to photograph and/or feed the macaques. 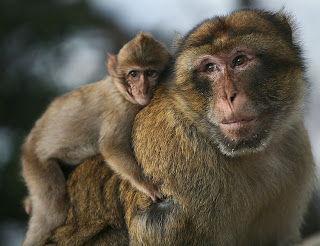 Collaborators from Roehampton University, the University of Lincoln, the École Nationale Forestière d’Ingénieurs, and the German Primate Center examined behavioral and physiological signs of stress in response to tourist visits in order to see which aspects of ecotourism--such as type and rate of human-animal interaction, total number of tourists, and proximity of visitors--affected the macaques most.

The average number of tourists that visited the macaques' habitat each day varied widely, from 0.3 to 54.6. Although most human-macaque interactions were neutral (e.g., there were no attempts to interact with the macaques them directly), about a third were associated with feeding the animals, and just under a third were associated with some form of aggression, including direct physical encounters.

As the average number of tourists increased, macaques performed significantly more self-scratching--a "self-directed behavior" that may reflect nervousness, just as nail-biting often does in humans. The macaques also increased performance of this anxiety behavior as the number of human-macaque interactions increased--regardless of whether the visitors were performing neutral, feeding, or aggressive behaviors. Physiological stress in macaques, as measured by fecal levels of the stress hormone corticosterone, were related only to the rate of aggressive interactions with tourists. 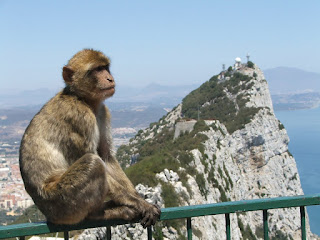 (Barbary macaque in front of the Rock of Gibraltar)

Clearly, the presence of tourists--even those who do not directly interact with macaques--can cause anxiety in these animals. It is particularly surprising that even seemingly innocuous or even positive interactions, such as taking photographs and providing food, can disturb macaques to the point of increasing stress behaviors, which divert time and energy away from more important activities.

Because ecotourism is fundamental to economic growth and conservation efforts in many areas, it seems likely that the presence of humans will not be banned from natural sites, but instead will be carefully regulated. Future research will be needed to determine just how many species suffer increased stress levels in response to human visitors, and what the long-term implications of those stress responses are. To some extent, stress is a natural part of all animals' lives, and may not have negative consequences as long as it is kept to a minimum. Perhaps additional studies can determine what that minimum acceptable level is, and what amount of human visitation is permissible before it is exceeded.

---
Maréchal, L., Semple, S., Majolo, B., Qarro, M., Heistermann, M., and MacLarnon, A. 2011. Impacts of tourism on anxiety and physiological stress levels in wild male Barbary macaques. Biological Conservation 144:2188-2193.
Thanks to the following websites for providing the images used in this post:
http://www.itsnature.org/trees/mammals-trees/barbary-macaque/
http://scienceblogs.com/laelaps/2007/12/male_barbary_macaques_like_the.php
http://www.realadventures.com/listings/1187970_Trekking-walking-in-the-atlas-mountains-Morocco
Posted by Caitlin Kight at 18:29