Can humans act as scarecrows to protect endangered species?

Although human disturbance is generally considered a bad thing for wildlife, an increasing number of studies are reporting that anthropogenic activities may help some species via the "scarecrow effect." This is the process whereby the presence of humans, or human disturbances, has a negative effect on one species (A) that, itself, is having a negative effect on another (B), perhaps through predation or competition for resources. As a result, species B experiences a respite and experiences greater success than it would have otherwise. One of the first observations of this pattern was made in Banff National Park, Canada, where elk (Cervus canadensis) that were habituated to human disturbance experienced lower vulnerability to gray wolf (Canis lupus) predation near human settlements, since the wolves were too wary of humans to closely approach elk that were utilizing anthropogenic habitats.

A similar pattern has recently been reported for endangered hawksbill turtles (Eretmochelys imbricate) and small Asian mongooses (Herpestes javanicus), which prey on their eggs. Collaborators from McGill University and the University of the West Indies examined patterns of habitat use among both humans and mongooses along Bath Beach, Barbados, in order to investigate whether mongooses would avoid humans and, if they did, whether this would increase survival of hawksbill nests. Additionally, they studied whether these patterns differed between open, "beachy" areas and closed, vegetated areas, since mongooses might feel safer in the latter, where they could better hide from human sight. 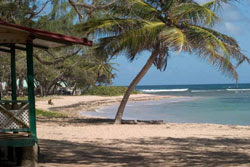 The presence and activity of mongooses were monitored using track pads--cleared areas of sand that permitted the researchers to see, and count the density of, mongoose tracks. They measured human activity by conducting head counts and quantifying occupancy of cars in the beach's parking lot. Finally, the scientists conducted daily surveys to locate turtle nests and determine whether they were undisturbed, disturbed, or hatched. Each of these techniques was repeated at both open (beach) and closed (forested) sites--both of which had sandy substrate where hawksbills could lay their eggs. 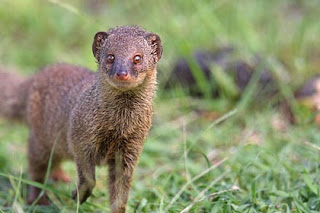 (The small Asian mongoose, Herpestes javanicus, was originally introduced to Barbados in the 1800's in an attempt to control local rat populations. In some areas, mongoose density now exceeds 10 animals per hectare.)

In forested areas, mongoose activity was fairly consistent throughout the turtle egg-laying season and on different days of the week. Mongooses could use the forest as cover for hiding from humans, and were therefore not highly sensitive to changes in activity level at the beach. However, mongoose activity was higher in the interior of the forest than along the edge, indicating that the animals were purposely avoiding areas where they were most likely to encounter people. In beach habitats, mongoose activity increased throughout the turtle egg-laying season, a pattern that was closely correlated with the number of nests available for predation. Activity was higher on weekdays and early mornings than on weekends and afternoons--again indicating that mongoose behavior was specifically tailored to avoid encounters with humans.

Overall, increases in mongoose activity were associated with increases in the likelihood that turtle nests would be predated; where mongooses were most active, nests had a 90% chance of being raided. However, mongoose activity decreased by approximately 25% for each 10-fold increase in human activity. Interestingly, models indicated that turtle nests did not benefit as much from the highest levels of human activity as they did from relatively low visitor numbers--specifically, from the presence of <50 visitors at a time. At these levels of anthropogenic disturbance, nest mortality could be reduced by anywhere from 29-56%. 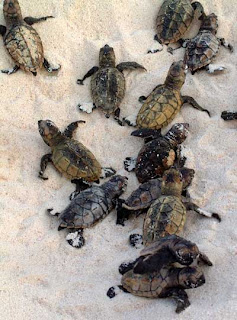 Why aren't the highest visitor volumes associated with the greatest improvements in nest success? Although further research will be needed to determine this precisely, it is possible that mongooses have a threshold beyond which any human group size is considered equally problematic, and/or that the mongooses begin to habituate to the presence of people when they are encountered in certain densities. Because people can have other negative impacts on beach habitat--for instance, trampling vegetation, compacting the sand, killing or scaring off alternative mongoose prey such as crabs--extremely high visitor densities may end up doing more harm than good.

In ecological communities such as this one, it will be important to identify the optimal level of human activity--in habitats where human visitors are currently banned, perhaps rules should be rewritten to facilitate the "scarecrow effect" via short visits by small groups of people. It will also be interesting to investigate which other habitats and species might be impacted by humans in this complex way. The authors postulate that indirect effects of anthropogenic disturbance are likely where interacting species differ in their sensitivity/tolerance to human activities, utilize different areas of disturbed habitats, or utilize the same areas but at different times.