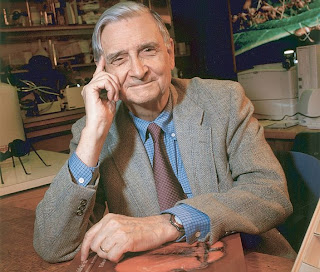 Originally I had thought to profile some of my favorite "anthrophysic" books today, but when I realized how many of them were by the same author, I decided to focus on him, instead. That author, E. O. Wilson, has been a rather controversial figure in modern biology, and a huge influence on my own scientific career.

Wilson's career as an author began in 1967 when he collaborated with Robert MacArthur on The Theory of Island Biogeography, which sought to explain species richness (or lack thereof) on ocean islands. By and large, this theory has stood the test of time quite well, with the idea of "island biogeography" being used to explain population and community dynamics in any fragmented habitat--including anthropogenic areas where large roads and stretches of buildings separate patches of habitat that are suitable homes for wildlife. To this day, I still routinely read anthropogenic disturbance paper that cite Wilson and MacArthur's seminal work.

In 1971, Wilson published a second book entitled The Insect Societies, in which he examined the life history characteristics that cause social insects to behave as they do, and described the fascinating interactions that can be observed among individuals of these species. Wilson's main love--and the focus of his academic research--was ants, which not only inspired The Insect Societies, but also his Pulitzer Prize-winning The Ants, co-authored by Bert Holldobler; Journey to the Ants: A Scientific Exploration, also co-authored by Holldobler; Anthill: A Novel, Wilson's first foray into fiction; and his most recent work, The Leafcutter Ants: Civilization by Instinct, again co-authored by--you guessed it--Bert Holldobler.

Undoubtedly, Wilson's most controversial work was his 1975 book Sociobiology: The New Synthesis. In this volume, Wilson states that humans behave as they do--not only at the individual level, but also at various societal levels--as a result of evolution. I once asked my undergraduate sociology professor what he thought of the theory of sociobiology; he was so disgusted at the mention of the word that he would not answer except to say--emphatically--that it was rubbish. Actually, I think his precise word may have been "bullshit." Another opponent of sociobiological thinking was Wilson's colleague Stephen Jay Gould, with whom Wilson had an incredibly public feud over the issue. Siding with Gould were heavyweights such as Richard Lewontin and John Maynard Smith; advocates of Wilson's point of view include Steven Pinker and Richard Dawkins--and, for what it's worth, me.

Wilson's next book was the first that won him a Pulitzer Prize: On Human Nature. This book explores sociobiological concepts in a format that is accessible for a lay audience. Wilson reminds readers that humans are just a species of animal, and, like other animals (and, indeed, all other living creatures), we are subject to evolutionary processes at all levels of our existence. A corollary of this tenet is that biology is intimately linked with psychology, religion, sociology, politics, and pretty much any other field you can think of. While some readers may find these ideas threatening, I personally find them liberating, comforting, and--once you think about them--just plain obvious. 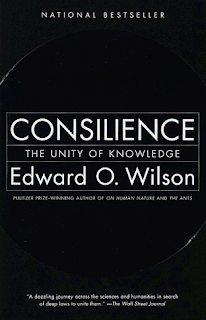 The theme of "interrelatedness" is expanded upon in Consilience, in which Wilson explores how different scientific fields have been unified over the years. He suggests that a similar process of unification among other fields of research--including such diverse areas as economics, the arts, the sciences, and politics--would advance our thought processes and lead to new innovations.

In the 1990's, Wilson increasingly began to focus on conservation and biodiversity. In 1992, he published The Diversity of Life, followed by The Biophilia Hypothesis, In Search of Nature (illustrated by Laura Southworth), The Future of Life, and The Creation: An Appeal to Save Life on Earth. The aforementioned Anthill also falls into this category, though it stands as the lone piece of fiction amidst this group of nonfiction volumes. Despite the fact that each of these books has been shaped around a plea to notice, value, and preserve the abundant beauty of our planet, they are all different enough that it is worthwhile to read each of them individually. Wilson has traveled widely during his life and has seen amazing things first-hand; his descriptions make you feel as though you are there with him, sharing his excitement at discovering and experiencing the amazing things that our planet has to offer.

The book in which this is most true is also my favorite, and the one book I can definitively say has changed my life: Naturalist, Wilson's 1994 autobiography. I was 13 when my dad gave me a copy of the book that he'd received as a press release. I had no idea who Wilson was or what he'd done, but I was mildly intrigued by the strange dust jacket picture of the distinguished-looking author peering at an ant specimen. One night, with nothing else to read, I found myself captured by the book's beautiful illustrations, and suddenly I was hooked--as were judges from the Los Angeles Times, who awarded the book the 1995 book prize for science and technology publication. It is, essentially, a romance: between boy and nature, young man and ant, adult scientist and discovery of knowledge. I have never read anything that so clearly drives home the message that you should always follow your heart and do the things you love; when you do, not only will you feel fulfilled yourself, but you can help others become so, too.

When I had to write an essay as part of my college applications, I discussed the importance of Naturalist in helping me decide that I wanted to become a biologist--and for inspiring me to pursue a career not only in science, but also in science communication, so that I, too, might help someone have an epiphany of his/her own one day. Imagine my surprise when the author himself arrived on my campus during my freshman year in order to speak at the dedication ceremony of our new integrated science center; imagine my excitement at meeting him, having him autograph my copy of Consilience, and getting the chance to tell him that he'd changed my life (I probably made a fool of myself, but I was so nervous at the time that I've almost completely blanked it from my memory now; at least I don't have to look back in embarrassment).

Many people agree that Wilson is probably a bit full of himself these days. When you've won over two dozen honors and recognitions for your work--work that includes generating and/or describing entirely new concepts never before articulated by any man--I suppose that's bound to happen. It's always a bit disappointing to find out that someone you admire is not 100% admirable, but I'm not perfect either. What really matters is that Wilson's writing is engaging and informative, with descriptions that are both accurate and exciting--because nature is an adventure, and even the most minute organisms and characteristics are full of meaning and importance.

That's one major reason why Wilson suggests that conservation is worth the effort. Another is that humans are just another species in the vast bio-catalog that is Earth. While we tend to think of ourselves as the most important creature, every other organism would say the same thing about itself, if it could. Wilson does an excellent job showing that we're all worthy in our own different ways; in some cases, that "worth" is actually literal--an economic, psychological, or ecological value.

Speaking of worth, if you're in the market for a little bio reading, it's worth a shot to try one of Wilson's two dozen or so books; with that many to choose from, you're bound to find something to keep you occupied. You might be infuriated, you might be fascinated, you might get depressed, you may find yourself uplifted...but you will definitely not be bored.