Ecological engineering: Encouraging the growth of oyster reefs to act as breakwaters

Shoreline habitats are among the most threatened in the world as a result of storms, sea level rise, and anthropogenic disturbance along the coast. The ecological benefit of these areas is immense, since they serve as breakwaters to protect the shore from degradation by wave energy, provide habitat for a huge variety of marine species--including those that are harvested for food--and recycle nutrients. Despite the fact that shoreline areas make up less than 1% of all global habitats, their "ecosystem service value"--the amount of money they save humans by performing useful tasks for us--has been estimated at $8 trillion per year, or almost a quarter of total global ecosystem services.

In places where the natural structure and function of shoreline habitats has broken down, ecosystem engineers have attempted to mitigate the erosive damage of waves by installing hard surfaces--seawalls, rocks, bulkheads--to dampen/reflect wave energy. Unfortunately, these can cause ecological damage and they are not generally very good at performing the other ecosystem services provided by the original habitat. As a result, recent efforts have been made to promote "living shorelines," one example of which is oyster reefs. These once-naturally-occurring marine features are not only self-sustaining, but act as a buffer against powerful waves, hold sediments in place, and encourage local biodiversity and richness by providing habitat for both invertebrates and fish. 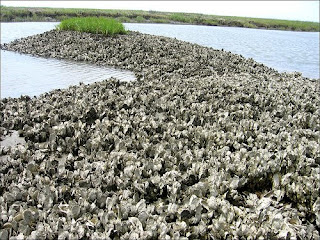 (Exposed oyster bed along the coast of South Carolina.)

At least, that's the theory--one that was tested recently by marine scientists from the University of South Alabama and the Dauphin Island Sea Lab. They installed artificial oyster reefs at two sites in Alabama's Mobile Bay: Point aux Pins and Alabama Port. The reefs consisted of loose oyster shell (purchased from a local seafood processing plant) placed on a "geo-textile" fabric and secured by plastic mesh anchored to the ocean floor. The fabric made sure the shells didn't sink underneath the soil and disappear, while the mesh was used to keep them from floating away before they could be cemented together by live oysters that settled on their surfaces. At each site, the researchers monitored an installed reef and a comparable nearby plot of land that had no structure at all. They compared differences in vegetation retreat (a sign that marshes are being eroded by wave activity), oyster settlement patterns (a way to gauge whether the reefs could be self-sustaining), and diversity/abundance of marine animal communities (an indication of whether the reefs could provide valuable coastal habitat). 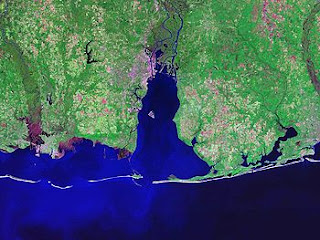 (Mobile Bay, along the northern part of the Gulf of Mexico.)

Overall, results indicate that the installed breakwaters can provide usable substrate for wild oysters, and that the resulting live reefs can harbor diverse communities of both fish and mobile invertebrates. At the Alabama Port site, the oyster reef was found to reduce vegetation retreat by more than 40%. Additionally, richness of both small- and medium-sized fish, as well as crustaceans, was higher near reefs than untreated control sites. For instance, spotted seatrout (Cynoscion nebulosus) were 88% more abundant near the breakwaters. Blue crab (Callinectes sapidu) numbers were 297% higher, which is good news for both local fishermen and seafood connoisseurs.

Interestingly, patterns were not always similar between Point aux Pins and Alabama Port, which indicates that minor differences in microhabitat--including variations in topography, water pH, average wave height, vegetation--may have a significant impact on whether, and how much, the "living shoreline" technique works. Additionally, the authors found that the reefs expanded and flattened over time, suggesting that future installations should be made of slightly different materials. Perhaps most disappointing was the finding that, although wild oysters settled, and initially thrived, on the introduced breakwaters, their numbers eventually dwindled--likely because of predation by fish.

Clearly, then, a few kinks need to be worked out before more of these structures are installed elsewhere. However, these findings do suggest that there is a way to combine both ecological and engineering approaches in order to create something that not only preserves the current state of the shoreline, but even enhances it.

Thanks to the following websites for providing the images used in this post:
http://en.wikipedia.org/wiki/Mobile_Bay
http://floridasportfishing.com/magazine/shallow-water-fish/spotted-seatrout-2.html
http://www.flickr.com/photos/huggingthecoast/2232411772/lightbox
Posted by Caitlin Kight at 05:06