Most people are familiar with the devastating environmental impacts of industrial waste, one of the major effects of which is to pollute water and cause harm to, or even the death of, aquatic wildlife. Previous studies of these processes have tended to focus on species that spend their entire lives in the water--fish, for example. However, there are some aquatic organisms that only dwell in the water for a portion of their life cycle. Many invertebrates, for example, spend their larval stage in streams and rivers, but, once they emerge, move onto land or the air just above it. There, they are an important source of food for species such as birds, bats, and other arthropods--including spiders.

Recent work by collaborators from the University of Sheffield has investigated the possibility that, by diminishing numbers of aquatic insects available for consumption, aquatic pollution can negatively impact predatory spiders. Although this possibility has been investigated in short-term experiments performed in a laboratory setting, the current study is the first to look at the effects of long-term pollution on entire populations of these animals. 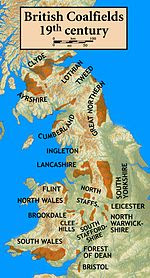 (Map of some of the British coalfields, including the Yorkshire coalfield where the current study was carried out.)

The researchers performed their study in England's Yorkshire coalfield region, where many streams are polluted by iron-rich runoff that discharges from abandoned coal mines. The iron forms compounds with other elements in the water, yielding a sludge known as ochre; this smothers the stream bed and reduces both the abundance and productivity of the aquatic insects that make up a vital component of riparian spiders' diets.

The scientists focused on 15 polluted streams that had received coalfield runoff for at least 10 years and were anywhere from 100-1000 m long. Each of these polluted aquatic sites was paired with a nearby "healthy" partner located in similar habitat. Within each of these pairs, the researchers compared the density and biomass of aquatic insect larvae, emerged aquatic insects, other terrestrial invertebrates that might be an alternative food source for spiders, and the spiders themselves. They also measured a variety of habitat variables just to make sure that their results weren't impacted by habitat-specific differences in things like canopy cover and dominant plant species. 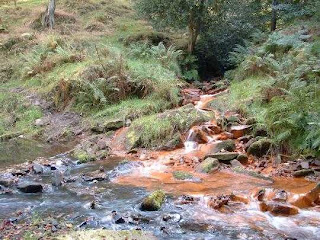 (Aquatic pollution caused by coal mining.)
On average, aquatic insect larvae were 88% less abundant, and had 80% less biomass, in polluted streams. Unsurprisingly, the abundance and biomass of emerged adult aquatic insects were similarly impacted. As a result, there were significantly fewer web-building spiders in the terrestrial habitat bordering the polluted streams. Of all the spiders surveyed, 99% fell into one of two families: the Tetragnathidae, or long-jawed orb weavers, and the Linyphiidae, or the sheet web weavers. The abundance and biomass of both groups were significantly reduced at polluted sites. Absolute numbers of Tetragnathidae were lower than those of Linyphiidae, likely because the orb weavers have stronger preferences for aquatic insects. 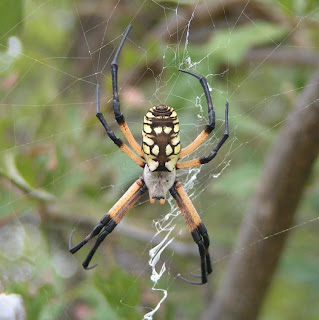 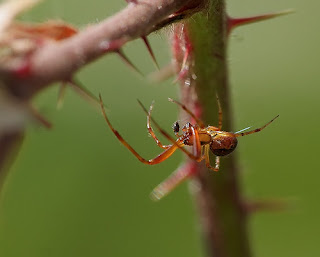 Interestingly, there were no significant differences between the polluted and non-polluted sites in abundance and biomass of alternative terrestrial prey organisms. In other words, there was no sign that spiders at the polluted sites had shifted their eating preferences to focus on more readily available prey--a behavioral response that might have allowed the arachnids to maintain higher population densities. Rather, the spiders' smaller population numbers likely reflect their consistent and maintained preference for emerged aquatic insects.

The authors found some minor impacts of habitat variables on spider densities, but these had nowhere near the effect of pollution. The one piece of good news for the spiders is that the coalfield pollution does not appear to be causing bioaccumulation of associated toxins such as iron, aluminum, manganese, and zinc.

Organisms that depend on an influx of food into their habitat from somewhere else--such as the riparian spiders studied here--are known as "recipient consumers;" the prey items that enter their habitat are called "spatial subsidies." Recently, it has been conjectured that alterations in spatial subsidies will affect recipient consumers differently depending on where in the food web the consumers are located; this is related to the amount of food that needs to be eaten by organisms at different locations in the web in order to consume adequate amounts of energy. While the current study shows that spiders are impacted by pollution-mitigated reductions in aquatic insect numbers, one unanswered question is how reductions in spider numbers might go on to affect other organisms in the terrestrial food web--including birds and small mammals. Thus, it appears that a good next step would be to census populations of these small predators in riparian habitats along polluted streams and explore their dietary preferences. It probably wouldn't be a bad idea to try to clean up the streams and stop the runoff, as well.