Balancing environmental and economic value: The case study of fertilizer use among farmers

Those of you who follow the Anthrophysis Facebook site may remember this recent link to a newspaper article on lethal algae at French beaches. In yet another topical confluence, a new paper from collaborators at the University of Alberta discusses the driving force behind these problematic algal blooms, (not to mention water quality issues in general and global warming): excess nitrogen use. 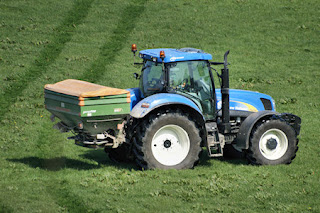 Or, rather, nitrogen imbalance, since some areas of the world have too much nitrogen as a result of over-fertilization, while other areas could benefit from the addition of nitrogen-based fertilizers that would improve crop yield. Nitrogen is the key limiting nutrient for most crops and is a vital part of growth processes in both terrestrial and aquatic ecosystems. Unfortunately, when nitrogen is added in the wrong form, the wrong amount, or at the wrong time of year, it may just end up leaching out of the soil and polluting water--causing algal blooms like those observed in France--and contributing to greenhouse gas emissions.

One method of rectifying the nitrogen imbalance is to reduce nitrogen overuse, but this is not always practical or possible. For one thing, as mentioned above, not all countries or regions are guilty of using too much nitrogen-based fertilizer. For another thing, there is already a high demand for nitrogen-thirsty agricultural crops such as cereals, and this demand is only likely to increase with rising population numbers and dietary shifts. If we can't reduce nitrogen use across the board, then we need to become smarter and more efficient with our agricultural practices.

This was recognized decades ago in many developing countries. In the European Union, for instance, there was a 56% decrease in excessive fertilizer use between 1987 and 2007, leading to reductions in ammonia emissions and nitrate levels in drinking water. Because so many farmers had been over-fertilizing, halving fertilizer use did not necessarily diminish agricultural output; rather, it saved farmers money that they would have spent on unnecessary nitrogen treatments, and it saved everyone the cost of cleaning excess microbes and chemicals from their drinking water. 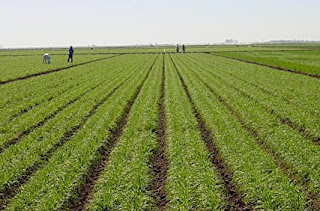 At the opposite end of the spectrum is China, where the government has encouraged farmers to increase fertilizer use in order to improve crop growth. It is thought that current yields could be maintained even after a 30-50% reduction in fertilizer use--leading to a savings of $11.3 billion per year, as well as helping the environment.

Of course, what works in one area may not work everywhere because of variations in soil quality, weather, preferred crop, and farming techniques (among other things). In sub-Saharan Africa, for instance, soil quality can be fairly poor, and many farmers would benefit from increased use of nitrogen fertilizer. Because of these sorts of regional differences, farming practices should be tailored to specific ecosystems. Farmers can manipulate tillage type, rate, timing of fertilizer application, source of nitrogen, type of crop, and the use of bioinoculants (which can improve plants' nitrogen-fixing abilities). This type of multidimensional approach would be well worth not only the current savings generated by reduced spending on unnecessary fertilizer, but also the future savings associated with having a cleaner environment. The researchers calculated that savings of $19.8 billion and $56 billion per year could be obtained by 2020 and 2030, respectively, even if the only thing farmers did was reduce their nitrogen budgets to match the regional fertilizer recommendations made by agricultural scientists. If growers manipulated other factors, as well, the savings would likely increase.

Overall, the authors recommend a 4-step plan to improve fertilization practices in a way that benefits both the economy and the environment. First, we need to reassess fertilizer use requirements in all agricultural systems, using criteria that consider both economic and environmental concerns and find a balance between the two. Second, these reassessments need to be translated into "user-friendly" models that are easily understood by everyone involved--not just farmers, but also policy-makers, economists, and conservationists. Third, we need to make sure that producers are not penalized when they volunteer to use less fertilizer or employ alternative agricultural techniques. Currently, some crop insurance policies will not cover farmers unless they use predetermined (and sometimes outdated) fertilization practices. Finally, researchers need to think outside the box when developing ideas for making reduced fertilizer use not only possible, but practical and even desirable. In Austria and Finland, for instance, "green taxes" are levied on farmers when they purchase fertilizer. 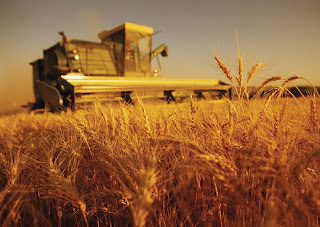 Some conservationists may feel uncomfortable with the idea of attaching a price tag to clean water and reductions in global warming. The authors of the current paper began their essay by quoting the American ecologist Garrett Hardin, who, in 1968, wrote "The Tragedy of the Commons." In that seminal work, he stated that individuals will sacrifice others' interests for the sake of their own--for instance, polluting water and air in the process of growing crops that put food on the table and money in the back. Because of this, it will sometimes be necessary to look at the environment from an economic perspective and show how conservation--or, at the very least, preservation--can also be lucrative. What matter if some people measure the benefit in coin while others measure it in peace of mind and spirit? As long as we all have the same goals in the long run, everyone wins.

Thanks to the following websites for the images used in this post:
http://www.thistlestables.co.uk/repairs.html
http://theinflationist.com/agriculture/theinflationist-buys-agriculture-etc
http://www.eoearth.org/article/Agriculture
Posted by Caitlin Kight at 03:02